Every year on 21st May we celebrate our island’s discovery 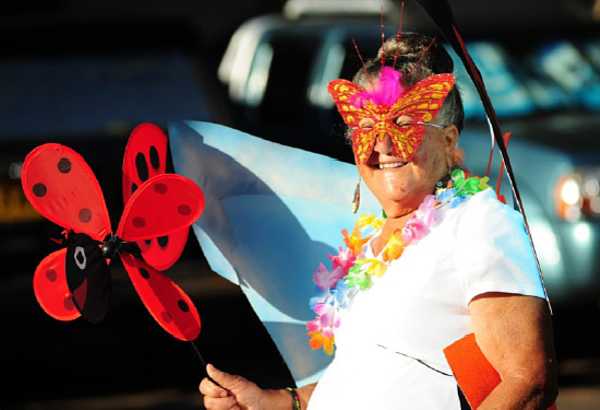 SEE ALSO: Saint Helena gave her name to our island.

Every year since 1945 we have celebrated our island’s discovery on 21st May with a Public Holiday and events{1}, even though the island was not actually discovered on this date!

The facts of our island’s discovery are in dispute…

Most historical accounts state that the island was discovered on 21st May 1502 by the Galician navigator João da Nova (sometimes, incorrectly, written ‘João da Nova Castella’), sailing in the service of the King of Portugal. Anchoring in what is now James Bay, it is said that he named it ‘Santa Helena’ after St Helena of Constantinople, whose Saint’s Day falls on 21st May. However, there are a number of problems with this story. For a start, da Nova would have been a Catholic, and they celebrate St Helena’s Saints Day on 18th August, not 21st May. Protestants celebrate Saint Helena on 21st May, but they hadn’t even been invented in 1502…

Some have disputed that da Nova actually discovered it, but a relatively contemporary record has recently been found - by Luis de Figuerido Falcão, Secretary of the Portuguese Government - confirming that it was indeed da Nova that discovered St Helena. Unfortunately, Falcão, does not give a date for the discovery and various theories exist. Please read our Discovery of St Helena page to learn more. (For the record, we believe the most probable date for St Helena’s discovery is actually 3rd May 1502.)

Despite this, the official history taught on St Helena and generally accepted on the island is that St Helena was discovered by João da Nova on 21st May 1502 and named St Helena, and hence we celebrate our National Day every year on 21st May and celebrated our Quincentenary on 21st May 2002. 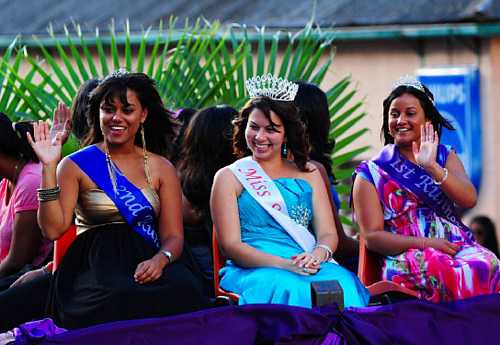 Miss St Helena and her entourage

Organised by New Horizons, events begin with a parade starting from The Cannister (home of the Tourist Information Office) and proceeding down Main Street to The Seaside. This is a more formal parade, with the Scouts, Police, etc. marching accompanied by the Scouts’ band.

This is followed by a church service, led by the Lord Bishop.

The day is filled with a variety of events: a fancy dress competition; novelty sports (including a tug-of-war contest); five-a-side football; and Mini-Marathon. There are also stalls to peruse, some raising money for island organisations, some advertising activities and others selling souvenirs and refreshments.

Towards the end of the afternoon the main Floats Parade starts from the General Hospital at the top of town and wends its way down Market Street and Main Street to The Seaside. There is often a theme (for 2014 it was ‘St Helena’s Biodiversity’; for 2021 it was Cultural Diversity) but some of the wide variety of floats demonstrate quite a loose interpretation of it! Much music and dancing is included.

Evening entertainment include live bands and all the bars at The Seaside are open.

The day ends with a firework display.

St Helena’s Day is celebrated in the Falkland Islands, where Saints make up around 10% of the resident population. In 2013, speaking at a reception held in Government House, Acting Governor Sandra Tyler-Haywood said that apart from very different climates, the Falkland Islands and St Helena had much in common: This reception - on such an important day for Saints - is an opportunity to celebrate those common bonds not just as UK Overseas Territories but also as island people.

The flag of St Helena is usually flown over the Foreign and Commonwealth Office in London on St Helena’s Day (picture, left, from 2016).

St Helena’s Day has been celebrated as a Public Holiday on St Helena since 1945{2}.

The 2016 celebrations took place a day late because 21st May 2016 had been designated for the official opening of the new Airport, though actually this didn’t happen. The 2020 celebrations were cancelled due to Covid‑19 social-distancing requirements. In 2021 the theme was Cultural Diversity, celebrating the many influences that make up modern-day Saints.

Pictures from the St Helena newspapers. Even Jonathan turns out!

It has been suggested that the celebration of St Helena’s Day should be held on the Monday before or after 21st May, rather than actually on 21st May. In 2019, for example, 21st May fell on a Tuesday, so after the weekend everybody went back to work for a day, then had a day off, then went back for the remainder of the week. It might have been easier if St Helena’s Day had been celebrated on Monday 20th. Please feel free to contact us with your views.

Events on 21st May

Events for your choice of dates on our page Chronology.

In addressing the public on Francis Plain on Wednesday morning His Excellency the Governor{4} reminded everyone how the St Helena Day celebrations came into being, following the joyful and successful occasion of the Queen’s Silver Jubilee in 1977 when people from all parts of the Island came together to join in the celebrations. He said he and others of the same mind felt that a St Helena Day had much to offer. Out of it all would come …a greater pride in St Helena, a feeling of belonging, a greater awareness of the skills and talents we have within our midst and hopefully a greater willingness to do things on our own, to put ourselves at the disposal of the community, to preserve and develop St Helena’s heritage as something that is unique in the world…

His Excellency spoke about the prolonged drought experienced this year and the good response from the people despite that setback. He said if the celebrations had been cancelled as suggested a few weeks ago, St Helena Day would have just been another holiday with nothing special to do, and many who had already worked hard to put in exhibits would have been discouraged and perhaps not want to work for the next celebrations.

He informed the public that as St Helena Day this year would be his last as Governor, he would not be able to give his support and encouragement at the next one, but hoped the public of St Helena would not let it die in their hands and the idea of it out of their hearts. He went on to say that much had been tried here and failed over the years, often for lack of persistence and public spirit, but hoped there would be enough community pride and good feeling …to call forth the will to help, so that the celebrations of St Helena Day will go forward year by year, with the active support of everyone on the Island as a happy birthday party in which all can take part, in pride and with pleasure…

The highlights of the celebrations were relayed over the radio the same day for the benefit of those unable to come to Francis Plain. It is hoped to summarise these for printing in next week’s issue of the News Review.

Footnotes:
{1} In 1945 on 21st May there was a Public Holiday for St Helena’s Day but it also celebrated Victory in Europe in World War 2. A Sports Day was held on Francis Plain. This was just a one-off.{2} Previously Commonwealth Day had been a public holiday, but this was effectively moved to 21st May.{3} @@RepDis@@{4} Governor Geoffrey Colin Guy.{5} Posted on Social Media and used with the poster’s permission but they wish to remain anonymous.