St Helena is in the South Atlantic Ocean, approximately 1,900Km west of the Angola/Namibia border

The Island of St. Helena is only a speck on the map{d}

It has population of around 4,400 people{2} and was discovered in 1502 by the Portuguese. The currency is the St Helena Pound (SHP) and the international telephone dialling code is 290. Our timezone is GMT.

It’s hard to think of an isolated speck of land more synonymous with inaccessibility than St Helena.{f}

Actually it seems St Helena is not (quite) where we thought it was… and may have been known before it was actually discovered.

Where in the world is St Helena?

Distance from South Africa: Such a tarnation one that even the most enterprsing of our subterranean engineers are agreed on the absolute futility of any tunnelling operations{h}

You could also see…

It has been suggested that one way to find St Helena is to just find Brasãlia and go east until you hit the island. Cursory inspection of a map might suggest this to be the case but actually Brasãlia is at 15°47“38”S and we are at 15°55’24.3”S so, by our calculations, you would miss St Helena by around 2,250Km. So much for that plan…☺

If looking for St Helena on the Internet you might first want to check our island’s correct name.

And did you know there was once thought to be a second St Helena, side-by-side with us in the South Atlantic? Check out our page Two St Helenas? to read more.

Our position in mid-Atlantic is a contributory factor in our exceptionally high air-quality.

The first world map we can find that shows St Helena is by Abraham Ortelius - his ‘Theatrum Orbis Terrarum’ from 1570 (though if you know of an earlier example please contact us{3}). This demonstrates that the claim the Portuguese tried to keep St Helena a secret is untrue (or they failed!) - supported by the existence of German Valentim Fernandes’ 1506 map of St Helena.

Until a reliable way of establishing Longitude at sea was established (in the 18th Century) the usual way to locate St Helena was to get to latitude 16° and then sail east or west until the island was sighted! Of course, it mattered if you went east and St Helena was to your west…

Note also that, around 80 years later and for the following sixty years or so, map makers started showing two St Helenas on their maps!

Heinrich Scherer’s 1702 map of the globeⒾ is also worth studying, and additionally features both St Helenas (see extract, right)!

…and probably a few others{5}. It would be nice if each of these had a unique name. For one thing it would make searching for St. Helena information on the Internet more reliable - we find the best search string to be:

…which is rather a lot to type!

How to get here

The many ways to get to St Helena are discussed on our Getting Here page.

As can seen from the 1886 map above, St Helena used to be an important stop en-route to and from the Cape. Today this is no longer the case. The map below is taken from live-tracking website www.marinetraffic.com, showing all ships in the south Atlantic as at 12:30GMT on 15th February 2017. The red lines (which we added) show the primary ship routes, going to the north and south of St Helena (blue dot) - this explains why ship-calls decreased when sail gave way to steam (more here).

Below: Not where we thought it was… Is situated…

Not (quite) where we thought it was…

St Helena Government is in the process of creating a new detailed topographic map of St Helena, the first update since 1990. Since then, a lot of things have changed, not just a new airport being built with regular scheduled flights and the imminent decommissioning of the much loved RMS. 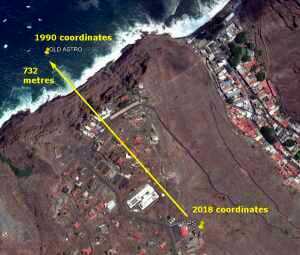 In 1990, Satellite Navigation Systems (‘SatNavs’) were still an expensive novelty, mostly used by the military. Nowadays, GPS (Global Positioning System) receivers are everywhere, very inexpensive and almost everyone with a smart phone has the ability to find their position with an accuracy of about five metres anywhere on the planet. The 1990 series St Helena 1:10,000 and 1:25,000 topographic maps are based on the old Astro DOS datum setup by the UK’s Directorate of Overseas Surveys (DOS) in 1971. Back then, GPS did not exist and far less precise astronomical methods were used to work out positions in the open ocean like St Helena Island. It turns out that the Astro DOS datum in St Helena is 732 metres off from truth (today’s GPS position). This means that anyone using a GPS in default setting mode with the 1990 series maps will plot their position 732 metres out, which on St Helena could be a serious mistake.

Of course, if you select the Astro Dos 71/4 option in GPS receivers this error goes away but this isn’t the ideal situation for safety reasons. In the ideal world your GPS position in default mode should match up exactly with the map, so this has necessitated preparation of new maps by SHG. The construction of the new airport, associated roads and port facilities has also warranted the update as well of course.

During 2015 and 2016, geodetic surveyors led by Murray Henry from SHG re-surveyed the Island visiting many of the original 1971 trigonometric stations and also surveying all of the post box walk tracks. The surveyors used state-of-the-art geodetic grade GPS receivers to get centimetre accurate positions of the trigonometric stations. The new datum is called the St Helena Geodetic Datum 2015 (SHGD2015) and is directly compatible with the default GPS datum which is called WGS 84.

A geodetic consultant from Australia, Richard Stanaway, who first visited St Helena as a tourist in 2009 was engaged to compute the new coordinates and work out the difference with the old coordinates. These transformations were checked using different GIS (Geographic Information Systems) to validate them with the latest satellite imagery over St Helena.

St Helena hasn’t really moved 732 metres; that is just the error of the old datum, but the Island is moving a few centimetres each year as she drifts away from the Mid-Atlantic Ridge. The GPS base station at Longwood run by the Jet Propulsion Laboratory (JPL) of NASA can monitor this tectonic motion precisely. St Helena is a key station in the international monitoring network.

Further information or the full report on this project, entitled ‘Geodetic Datum Modernisation for St Helena’ is available on request from Samantha Cherrett (samantha.cherrett@enrd.gov.sh) or Devlin Yon (devlin-yon@enrd.gov.sh) at Essex House, Tel: (+290) 22270.

Just about everything you read about St Helena begins with some variation of this:

St Helena is situated at a latitude 15° 55’ south and longitude 5° 45’ west{8} in the South Atlantic Ocean. The island is volcanic in origin and almost everywhere rugged and mountainous, rising to a peak of 820m high. The island is approximately 16km long and 10km wide, and is some 1,600km off the West African coast. Its nearest neighbour is the island of Ascension 1,100km away. It is about 7,250km from the UK and 2,700km from Cape Town. Its capital, Jamestown, is on the north leeward shore. Although within the tropics St Helena’s coastal climate is kept mild year-round by the south east Trade Winds. It is warm, damp and equable.

Footnotes:
{1} Location of Jamestown according to latest GPS data.{2} The total resident population on 7th February 2021 was 4,439, 4,118 of which were St Helenian and the remainder visitors, temporary workers, etc.{e}{3} Strictly, St Helena is shown on Mercator’s 1569 map, but it is hidden behind a legend box (an indication of our perceived importance!) so we think that doesn’t count. [Image, right]