St Helena is moving forward with the use of renewable energy

Our earliest renewable energy source was the wind turbine electricity generators on Deadwood Plain. The original three turbines, installed in or around the year 2000, were expanded to six in October 2009 and since April 2014 have been expanded to twelve. Together they generate around 2MWh of electricity - around 18% of the island’s total need. Figures issued in May 2015 by the supplier of the island’s wind turbines, Wind Energy Solutions, gave the total energy generated to date by these turbines as 6,317,527kWh, resulting in a CO² saving of 6,747,118kg.

In addition, since May 2012 electricity-generating solar cells are being installed on government buildings and those of the island’s power generator Connect Saint Helena Ltd.. The aim is to produce a further 1% of the island’s electricity through these. Plans are also in hand to build dedicated ‘Solar Farms’ at specific sites across the island (one is already operating), selected such that the panels will collect energy without impacting the scenery of St Helena (see project update panel, below). Subject to satisfactory testing it is also envisaged that similar units could be made available to domestic users. Solar cells only generate power during the daylight hours but as heating is not a major issue in St Helena (the temperature rarely falls below comfortable levels) a significant contribution can still be made.

The original plans for the ‘Wirebird Hills’ resort, to be built by SHELCO in Broad Bottom envisaged a possible Ocean thermal energy conversion solution to generating the complex’s electricity needs. Whether SHELCO’s new owners will continue these plans is not known.

In the 2016 CensusⒾ only two homes were reported as being totally powered by renewable energy sources, both of them by photovoltaic solar energy. You can see the 2017 figures (right).

St Helena households and businesses have also adopted a wide range of energy saving measures, driven perhaps by the very high cost of electricity on the island (in 2014 it was up to £0.42p per KwH, depending on consumption). Double-glazing is, however, uncommon on St Helena - it is rarely cold.

In 2021 45.1% of houses were equipped with solar water heating panels{d}, and energy-saving light bulbs are widely available, often at subsidised prices (SHG provided all households with some free energy saving light bulbs in 2010, funded by DFID). Two houses had solar electricity generation in 2016.

In 2022 the Environment, Natural Resources & Planning (ENRP) Building at Scotland, St Pauls was fully upgraded for energy saving, not just with solar electricity panels but also light wells to funnel sunlight to the darker corners of the building.

If you are interested in reducing your electricity usage, Connect Saint Helena Ltd. has produced some advice leafletsⒾ (the tips they contain apply everywhere, not just on St Helena).

In September 2014 it was reported that By this time next year St Helena will very probably have achieved a target which is considerably higher than the same target both the UK and the European Union [EU] hope to achieve by 2020. Right now, St Helena has already hit the UK/EU target for 2020 and the long term aim is to keep hitting targets way above whatever the UK/EU can hope to achieve. This particular target is the amount of electricity generated by renewable energy. In fact, the following press release was issued by Connect Saint Helena Ltd. in July 2015:

June 2015 saw a massive 33.4% of the islands electricity being generated by renewable energy. The solar farm was brought on line and now complements the wind turbines on Deadwood Plain. 33.4% last month equates to a saving of 73,000 litres of diesel fuel which is enough to fill the fuel tanks of half the island’s registered vehicles!

You can access data about the energy generated from the ‘farm’ at www.sunnyportal.com (click on ‘Publicly available PV systems’ then find St Helena).

In April 2018 the Government of St Helena announced it had chosen a supplier to provide a renewable energy solution for St Helena, aiming for 100% renewable electricity by 2027. After lengthy contract negotiations it was announced on 29th May 2020 that an agreement had been signed with PASH Global. Under the agreement, in the first instance PASH Global would be providing a full 568kWp/500kW solar farm; 2.7MW wind farm made up of three turbines; and a 3.2MWh/3.5MW Battery, together generating at least 9.133GWh per annum, 77% of the island’s 2019 energy demand (11.8GWh). However in 2021 PASH Global decided that it would prefer to invest elsewhere and withdrew from the project. At the time of writing the Government of St Helena is both looking for an alternative contractor and cosidering other options to deliver the desired 100% renewable solution.

Set in the middle of the Northern-hemisphere Winter, Cut Your Energy Costs Day is marked on 10th January for people to think about reducing their energy usage. On St Helena the issue is rather different. 10th January is in one of our hotter months, and heating costs should not be a problem in January, but our year-round energy costs are high because the per-unit charges are some of the highest in the world, so any way to reduce energy bills is certainly worth a day’s thought.

In 2013 the Government of St Helena ‘divested’ responsibility for the island’s electricity supply & distribution, water supply & distribution and waste water collection & disposal to a limited company - Connect Saint Helena Ltd. - which it owned (and still owns) 100%{2}.

To ‘connect with’ Connect Saint Helena go to www.connectsainthelena.com.

Tokelau has become the first territory able to meet all its electricity needs with solar power, officials say. The South Pacific territory - comprising the three atolls of Atafu, Nukunonu and Fakaofo - had been dependent on diesel to generate electricity. 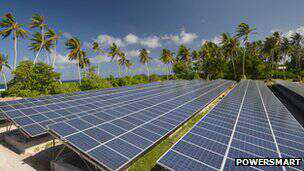 New Zealand, which administers Tokelau, funded a $7m (£4.3m) solar project. Solar grids were constructed on the three atolls, with the last completed earlier this week.

Until now, Tokelau has been 100% dependent upon diesel for electricity generation, with heavy economic and environmental costs, he added.

Project co-ordinator, and PowerSmart MD, Mike Basset-Smith said that the move represented a milestone of huge importance for Tokelau, as it would now be able to spend more on social welfare.

The remote islands of Tokelau lie between New Zealand and Hawaii.

An example for St Helena?