Before motor cars, donkeys were the mainstay of St Helena transport

Donkeys (equus africanus asinus) are, of course, not unique to St Helena; but they formed such a vital part in our development we think they deserve special attention.

Prior to this goods were, presumably, carried by the enslaved. The Records for November 1715 report the presence of ‘12 Asses’.

Donkeys were also used to power the Ladder Hill Railway. 119 are known to have been imported in 1901, to provide extra load-carrying capacity because of the need to supply the Boer PoW camps.

Donkeys show up in many of the earliest pictures of the island and continue to appear well into the 1970s. They were extensively used in the Flax Industry.

Donkeys did, however, cause a problem early in the 20th Century. Apparently the number of free-roaming stallions was causing a problem (particularly to the owners of mares!) and it was also felt that the breed could be improved by selecting only the best stallions and castrating the rest. The result was the ‘Stallion Donkeys Ordinance’ of 1904, requiring castration of any Stallion not selected for breeding by a Board of Inspectors. Around 250 Stallions were castrated with only 12 being certified for breeding. In The ‘Blue Book’ for 1905 Governor Gallwey reported that The ill feeling, which was so prevalent formerly, caused by neighbours’ stallion donkeys fighting and killing each other, no longer exists and mare donkeys, which were formerly chased by stallions all over the hill sides, now have the quiet time.

In The ‘Blue Book’ for 1927 we read Donkeys will never be displaced in any economic scheme in St Helena.

However, as cars began to take over, and with a growing awareness of ecology and the environment, free roaming donkeys were increasingly seen as a pest, and people were encouraged to keep their donkeys and other animals under control. The talk (right) was broadcast on Radio St Helena on 25th October 1976…

One feature of donkeys that has still not quite been perfected with motor vehicles is self-driving. Once a donkey knew its route people used to pack it up at home with goods for sale in town, despatch it in the morning unaccompanied with a shopping list, and some kind soul in town would unload it, sell the produce, buy the purchases and set it off back to home to arrive in the evening. Try doing that with a van!

In the ‘before days’ when a donkey stallion needed to be castrated it was always done around the time of the new moon. If you know why please contact us.

If you try to please everybody, you’re going to lose your donkey.{j} 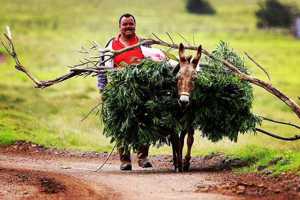 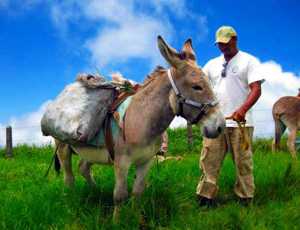 There are still a few who prefer donkeys as their means of goods transport, and in country areas it is not yet unknown to meet someone leading a donkey laden with freshly cut vegetation on its way home{4}.

Those donkeys that no longer work a mostly kept in the ‍Casons‍ area, though some feral donkeys have elected to live in the almost appropriate area of Horse Pasture. The donkeys are generally friendly and approachable.

Donkeys are not supposed to wander around unmanaged, but… 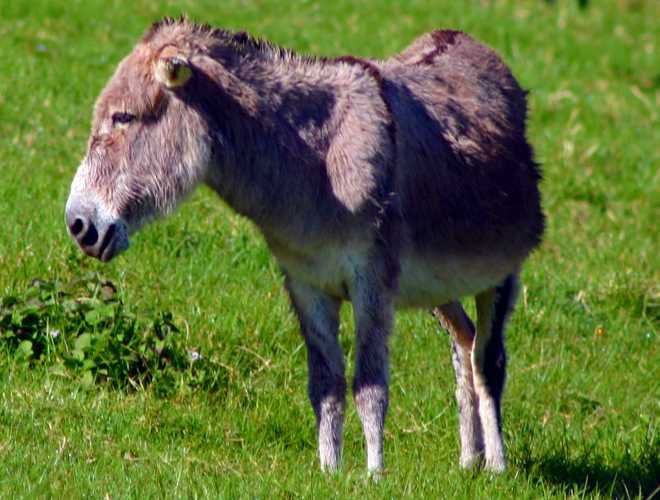 Expressions of impossibility: When hell freezes over ⋅ Twelfth of Never ⋅ When you can get blood from a stone ⋅ When donkeys fly

The donkeys are kept in a field at Casons, on the road to Blue Hill village. You can easily stop by the roadside and if you get out of your car one or more of the donkeys will probably wander up, just in case you have food. You can pet them through the fence, but please don’t feed them or attempt to climb into the field with them, as the wrong diet upsets them and unfamiliar company disturbs them. They wouldn’t intend to hurt you but accidents can happen.

The St Helena Donkey Home manages the Donkey Home, including providing feed and organising veterinary care. It can be found on Facebook™.

In January 2011 the St Helena National Trust announced that nine of the island’s donkeys will now be employed in ‘the old fashioned way’, carrying endemic plants and other equipment up to High Peak and Blue Point as part of the Darwin Project.

For thousands of years donkeys have been the ‘helping hooves’ of humankind and Donkeys have been used on St Helena for centuries to carry wood, flax and feed and it will be great to see them being used for work again and perhaps even for the tourist industry to take picnics on walks.

The Darwin Project’s aims include conserving some of the most precious habitats on the island and establishing a new conservation apprenticeship scheme, running for three years from October 2010.

Sadly the ‘new beginning’ turned out to be a false dawn - the project ended when Jodie left.

‘You have donkeys; why not horses?’

There used to be horses on St Helena. In 1757 The East India Company wrote: Horses are of infinite value and contribute much to the ease of the Inhabitants in this hilly place as well as for the convenience of the gentlemen that call here in shipping. They were the primary means of transport for the upper classes, until they were replaced by motor cars in the 1930s (the first car arrived in 1927). There were even horse races held on Deadwood Plain, starting in the 19th Century and continuing intermittently until the 1920s.

There were twenty horses recorded in a 1970s animal census, but none remained by the mid 1990s (the last is thought to have died in 1994/95). The photograph (right) may be of the island’s last horse. It has been suggested that horses might be restored to St Helena to provide pony trekking for tourists.

World Donkey Day, on 8th May, is not formally celebrated on St Helena, but if you do want to celebrate it, go visit our donkeys!

Today we have interviewed Jodie Mills who runs the St Helena Donkey Home; an important conservation effort caring for the donkeys across the island.

Q: Tell us a bit about yourself. How long have you lived on St Helena for and what is your role at the Donkey home?

I have lived on St Helena for ‘Donkey’s Years’ - well actually no, only three and half years but I couldn’t resist squeezing a donkey pun in somewhere! When I arrived on the Island in my new conservation job my new boss took me on tour and we drove past some donkeys in a field. He said it was such a shame that no one looked after them or used them for work anymore. This got me thinking; I had always wanted a horse when I was younger, now this was my chance to have 13 donkeys instead! So I went to see the government’s Agriculture and Natural Resources Department who were over the moon that someone wanted to look after the donkeys and the St Helena Donkey Home was born! 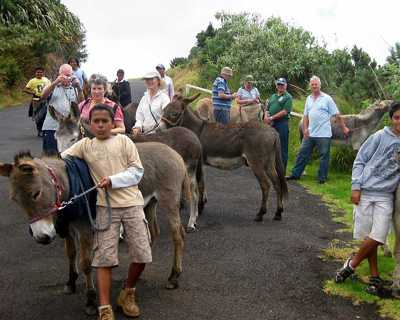 Q: What is the purpose of the Donkey Home?

The purpose of the Donkey Home is to:

We do this by:

Q: Do you offer any activities for tourists visiting St Helena?

Yes, we have a regular donkey walk every Saturday morning which are very popular with locals and tourists alike and we also offer an eco tour with the donkeys around one of the most scenic areas of the island with tree planting and a picnic carried by the donkeys (and most often shared with the donkeys) thrown in too.

Q: How many donkeys do you now have? Are you expecting any new additions this year?

We currently have 14 donkeys and have just gained two new donkeys, one of which was in a terrible state that had been attacked by biting flies and Mynah Birds to the point where there was no hair left on her legs. She is now recovering well. The other new addition is a lovely old boy called Prince, probably the oldest donkey on the island - around 40 years old! He struggled a little walking up the hill to his new home but when on the flat he was off like a rocket! We also have two pregnant mares who will be expecting later on in the year. Donkeys are pregnant for a whole year (I have recently had a baby and nine months was enough!) so a long time to wait for new arrivals…

Q: What is the history of donkeys on St Helena?

In the past donkeys were an essential part of Island life; offering loyal service throughout many generations of our history. As ‘helping hooves’ to the islanders, donkeys transported goods and people all around the Island for centuries. They serviced visitors and locals alike, forming the backbone to the successful flax industry of St Helena. After all, a donkey is stronger than a horse of the same size!

However, with the introduction of electricity, cars and the collapse of the flax industry, Donkeys found themselves out of work. Many people no longer wanted or could no longer care for their donkeys and the population plummeted from 1650 at the height of flax industry in the 1960s to just 38 today. 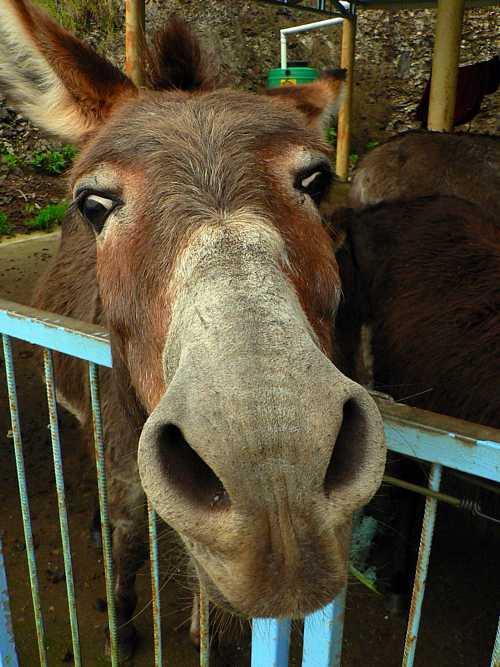 Q: What is your passion behind caring for donkeys?

I have always loved donkeys and horses and spent many a summer holiday on Scarborough beach nagging my mum for another 50p for a donkey ride. To now have the opportunity to care for 14 donkeys is a real treat for me - I love it.

Q: Is the airport development having an effect on the Donkey Home?

In May 2012 the donkeys on St Helena were in desperate need of a shelter as their paddock often gets very wet in the winter and all the donkeys suffer from seedy toe and thrush in their hooves. That month we happened to have a male donkey in and I named him Basil after the airport contractors Basil Reed. I arranged a meeting with the CEO and said, We’ve had a baby donkey and named him Basil - would you like to build him a shelter?…and they did!!! They did such an amazing job and now all the donkeys can enjoy a cosy night’s sleep undercover. I’m just hoping Basil will get an invite to the opening of the airport…

Q: Is the Donkey Home currently fundraising for a cause? How can people get involved with the home from overseas? Can we adopt a donkey?!

The Donkey Home relies on donations, grants and the sale of merchandise. Here’s how you can get involved:

Footnotes:
{1} Note that adults riding on donkeys is no longer considered advisable, as it can cause spine damage.{2} Also shows the old Standard building. The building on the far right is now the Bank of St Helena.{3} Note also the people in Chinese dress (lower right) - presumably some of The Chinese Labourers here in the early 19th Century.{4} Keeping a donkey in Jamestown, or bringing one into Town, is these days prohibited by Ordinance.{5} We do not, however, recommend any of these ‘cures’!{6} See more blogs.{7} The four ‘Wirebird’ publications should not be confused.{8} @@RepDis@@{9} The four ‘Wirebird’ publications should not be confused.{10} Published by the Tourist Information Office{7}.