St Helena is a small island…surrounded by even smaller ones

St Helena is surrounded by many smaller islands. Those on the North-western side are most visited because the sea is calmer here - the ocean waves, like the wind come from the South-east. Only the larger islands have names (or at least, only these appear on maps). Maybe if you come and explore you might get to name one of the smaller islands?

The best reference for identifying islands is the Admiralty 1922 map{3}. You can view it hereⒾ.

For some rather bigger islands, somewhat further away, see Our Sister Islands.

There are 27 named islands surrounding St Helena. We list them below, starting at Gill Point (on the Eastern side of the island) and proceeding clockwise around the island{4}: 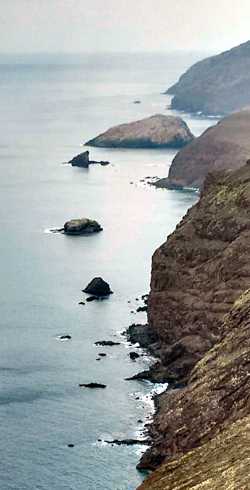 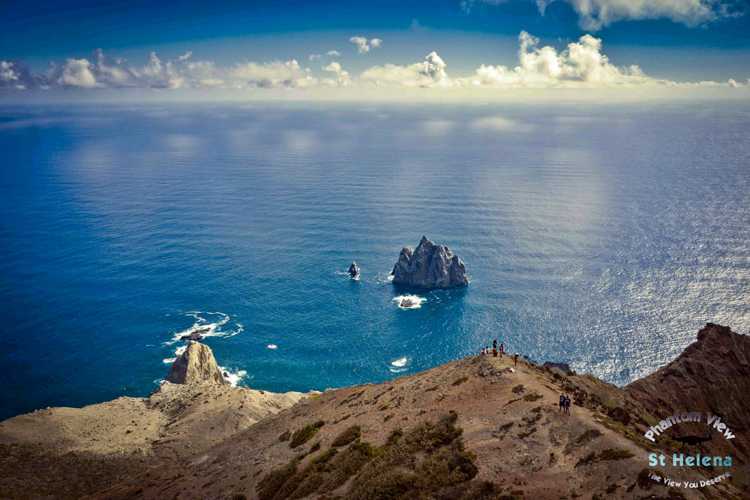 There are no named islands between The Lion, in the middle of the North-west coast, and Shore Island, towards the Eastern-most tip. The North is entirely devoid of named islands, and has very few unnamed ones (there are some below The Barn but that's just about it). This is not because the sea floor falls away faster here (using depths on the 1922 Admiralty map). Maybe a Geologist can explain this - we can’t!

Note that there are three islands called ‘Flat Rock’. This tells us a lot about how islands got their names. In all probability three people independently spotted a small island with a flat-ish top and called it Flat Rock, and it was only when somebody came to make a map that the duplicate names came to light. As none of them were of military significance the duplicate naming did not matter so it remains.

Interestingly, and rather usefully, there are no islands in James Bay and Ruperts, which is really helpful to ships trying to anchor there.

Some of our islands are worthy of further note, either because they appear in the Records or for some other reason…

The Chimney is near Lot’s Wife’s Ponds, and is often visited by people visiting The Ponds. It has no historical significance but an enormous pillar or rock you can stand beneath (at low tide) is a must-see!

Pedants may feel The Chimney doesn’t qualify as an island because it is only surrounded by sea at high tide. But we think it’s interesting so we included it.

Egg Island in the Blue Hill District guards the entrance to both Swanley Valley and Old Woman’s Valley and hence was fortified with Cockburn’s Battery. This would have been quite a challenging posting because Egg Island is much favoured by sea birds as a nesting site. Dolphin watching trips from Jamestown often visit the island but remain distant and upwind, as the smell caused by centuries of accumulated guano is quite striking! Egg Island is the only island with a military installation.

In the 18th Century birds eggs were collected from the island for eating. So popular did this become that in October 1707 a notice was issued warning the population that collecting eggs is only permitted on Tuesdays, Thursdays and Saturdays. Why this restriction was imposed is not known.

There is a tablet on the wall of St. James’ Church which reads: In memory of GEORGE SINGER who met his death by being accidentally precipitated from off Egg Island when faithfully serving his employers by whom this tablet is erected as a mark of respect to a worthy good servant. The tablet is undated but we presume Mr Singer was manning Cockburn’s Battery when the incident occurred and that his employers were The East India Company.

There is a poem about the island:

There is a tiny rock that hugs her Mother Isle;
Egg Island is its name an aptly framed profile.
With battery atop to guard the Northern coast;
A sanctuary today, it is the seabirds’ host.
In olden times on duty there were soldiers found;
Unhappy tale there was of one who sadly drowned.
Remembered he his name engraved upon the wall;
To him in Jamestown Church relates his fateful fall.
It’s now an isolated guano shrouded throne;
Where soldier ghost patrols his restless haunted zone.
Encompassed by the sea this edifice does dwell;
Egg Island long fabled by bright immortal shell!
{f}

George Island is one of our larger islands, but as far as the Records go it does not exist! We could only find one mention of it - in the story ‘The Guano Trip’ on our page Memories of St Helena. Maybe somebody regularly goes there, but it is on the Eastern side of the island and so most exposed to the sea, and it’s a long way from a comfortable harbour, so it must be hard to reach. It is best seen from Sharks Valley in Levelwood, or you might spot it from the aircraft if you land from the South.

Why is George Island so named? We don’t know (but there are two theories). 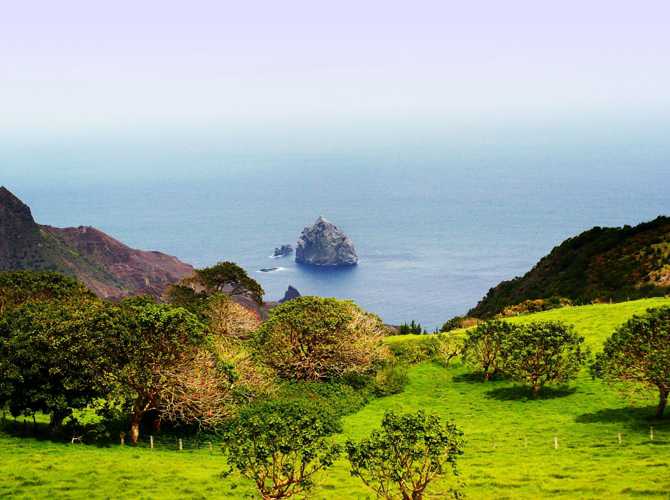 Speery Island is in the Blue Hill District, and is best viewed (on land) from Botley’s Lay. Speery Island wasn’t discovered until October 1722, by a Captain Goodwin. Naming it ‘Spheree’, he thought its white colour was due to salt deposits (salt being much needed in 1722). It is actually caused by thick deposits of guano - the island is a seabird nesting site. That must have caused some disappointment (though Guano itself was useful as fertilizer and was actively collected until recent times.)

Unlike Egg Island, Speery Island was never fortified, despite it being much bigger so better for building a fort. The reason is simple - the cliffs surrounding Castle Rock Point are impossible to climb, so fortification was not necessary - Nature would deal with any prospective invaders!

Editor’s Note: we included this because, as is evident from the text, the tour went all the way around the island, even around the Eastern side, unprotected from the ocean waves and the wind from the Southeast. Today few tourist trips would consider such a route, and we therefore think these Teachers should be classed as ‘Intrepid’! Incidentally the St Helena Wirebird{8} credits the article to A Teacher, but we were contacted in January 2020 by Edgar Wagstaff’s niece, Monica, who revealed her uncle’s authorship. 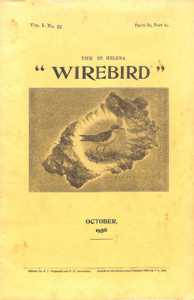 Some weeks ago, all Head Teachers received a circular letter from the Acting Education Officer, Mr. E. J. Wagstaff, which included some pleasant news for the staffs of their schools. The news was that an outing had been planned for those who wished to go on the first suitable day of the Winter Holidays.

The planned outing had to take place on a day of reasonable weather, because it was to be a ‘Sea Tour around St Helena’, and those members who wished to go had to be prepared to receive a message of postponement at the last minute, pending the weather.

At the first glimpse of the news in the circular excitement was aroused in those Teachers who were eager to go, and day after day the trip was being looked forward to.

Look-outs from different parts of the Island viz. Sgt. Dillon from Longwood and Mr. A. Evans from Levelwood School were asked to watch for calm seas etc. suitable for the tour.

However, two weeks of unsuitable weather had passed, before the teachers received the news to be in readiness with food and drink, and swimming equipment for the following day.

Teachers were grouped and asked to meet at the most convenient places, e.g. Longwood Gate, Hutt’s Gate etc. where they were to be picked up by a bus and taken to the Wharf, Jamestown, by 9 a.m.

After all had arrived, the main discussions were about rough seas, sea-sickness, swimming, food etc. Teachers who were not sea-dogs were advised to take Anti-sea sick Tablets before leaving the steps to combat sea-sickness.

Having the necessary equipment for the tour, we then boarded a rowing boat which made several trips to a motor boat, the Wideawake which was engaged for the tour and which carried about 40 passengers.

Then, leaving Jamestown Harbour at 9.20. a.m., maps of the Island were distributed among the teachers to enable them to follow the coast line of St. Helena.

Apart from following their own maps, teachers’ attentions were specially drawn by Mr. E. J. Wagstaff and Sgt. Dillon to the well known parts of the coast line and the Island interior which could be seen better from the sea. Great interest was taken of George Island, Shore Island and Speery Island, especially of the birds thereof.

The choppy sea from Jamestown Harbour to S. W. Point, made a few teachers sea-sick in spite of having taken the tablets previously.

From S. W. Point to Lemon Valley the sea was calm and having disembarked at Lemon Valley for about three hours for lunch, a swim and relaxation, those who were sick had revived a good deal and were able to continue the tour back to Jamestown Harbour by 5 p.m.

Thus ended a merry day’s tour around St. Helena, leaving all passengers happy, contented, fit and eager for another at an early date.

Footnotes:
{1} The other island is Peaked Island.{2} Guess which is which!{3} Simply because it is the highest-resolution map we have on Saint Helena Island Info, and islands don’t change even in years!{4} Not all islands have a What3Words

location because we have to identify the location-words on the What3Words website from a satellite photograph, and some islands are too small to spot, or maybe were submerged when the photograph was taken. As the islands are listed in order (going clockwise round the island) you can infer, at least approximately, the missing locations.{5} In Read’s Map of 1817 it is labelled ‘Hercules Island’.{6} The four ‘Wirebird’ publications should not be confused.{7} @@RepDis@@{8} The Government newspaper{6}.