Much of the information presented here comes from the booklet The History of the Chinese Indentured Labourers On St Helena - 1810 to 1836 and beyond by Barbara B. George BEM, published in 2002{2}. The booklet is (probably) still available on the island in printed form, and contains much that we have not summarised on this page. 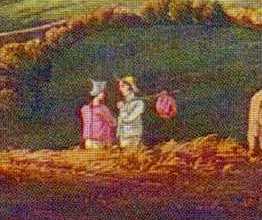 In the early years of the Colony manual labour was mostly performed by the enslaved but their emancipation in the early 19th Century left a gap in the labour market. Governor Patton (1802-1807) had the idea of bringing in workers from China to overcome the labour shortage. He sent to contacts in China requesting that men be recruited and sent over on short-term contacts to be put to labour here. They were not to be enslaved; they were to be paid, albeit poorly. Accommodation was to be provided (though the quality of same was not advertised) as was transport to and from St Helena.

Governor Patton’s request did not receive an immediate response. Indeed it was not until May 1810, under Governor Beatson, that the first Chinese labourers arrived. Initially only a relatively small number decided St Helena was the place for them; a note in the Records dated June 11th 1810 reports that there were 54 Chinese labourers on the island at that time. The Governor proposed that Sgt. Thos. Ford act as their overseer, managing the supply of workers to the various farms and plantations including The East India Company gardens at Plantation House. Ford calculated the cost of bringing in Chinese labourers at £28 per annum per person, so it was concluded that St Helena would benefit from bringing in many more - maybe up to 300. Governor Beatson agreed and also suggested they could aid the military as labourers, and would also reduce demands on soldiers to perform labouring duties. Beatson recommended to Council that number be immediately raised to 200.

Initially employed on 3-year contracts but later extended to 5-year contracts, most went home to their families in China at end-of-contract. Only a few were permitted to stay{4}.

A further 150 Chinese labourers arrived in July 1811. Amusingly, their arrival caused the administration to realise that there were insufficient quantities of agricultural tools on the island for them all to use, so a request was swiftly sent to London for urgent supplies{5}.

It is thought most of them came from Macau or Canton. Not all were specifically transported here; it was also common to recruit Chinese seamen from calling ships.

Note that although the initial request was for general labourers, it was soon discovered that artisans (in various trades) also applied. There were brought here and applied to their trade (no doubt much to the dismay of the island’s established tradesmen). Chinese labourers are known to have helped in fixing up Longwood House for use by Napoleon, including building the pavilion and an aviary (now in a museum in Chateauroux). Some think they also contributed to building The Run.

The Chinese were technically guests on the island, but that is certainly not how they were treated. Indeed it seems their treatment was little better than that of the enslaved they replaced. Here are a few examples from the Records:

Possibly influenced by their poor pay and mistreatment, the Chinese did not always behave themselves on St Helena. Here are a few incidents from the Records:

Some Chinese clearly decided that they did not want to complete their contracts. In July 1814 Caption Harrington of the Maleby Castle reported finding some Chinese stowaways attempting to desert.

When he arrived in 1823 Governor Walker decided there were too many Chinese on the island The establishment has gradually increased until it has more than doubled the original number and at present greatly exceeds the wants either of the inhabitants or of the Public. By the last return, the number of all descriptions was 442. The alteration in the circumstances of the island{13} certainly does not require the present number of Chinese. It was agreed by Council that numbers be reduced to 300 and no more to be landed. On 3rd April 1824 151 Chinese were embarked on board the General Harris. A further 54 were sent on the Lord Lowther on 20th April 1826.

By 25th October 1826 Governor Walker reported there were 233 remaining Chinese, comprising 44 labourers; the rest as Cooks, House Cleaners, workers at the Fortifications, and other Public works, not from any real necessity, but principally because they are in the island, and as long as they remain, must be employed in some way. He went on to say It has occurred to me that by substituting European labourers for the Chinese, the agricultural improvement of the island would be accelerated in a much greater degree and at a much cheaper rate. The labour of one European is at least equal to that of 2 Chinese.

As a result here is a communication to Captain McMahon, Superintendent of Chinese, dated 2nd March 1836: Sir, I am directed by HE the Governor to inform you that all the Chinese at present employed at the Public Works and any others who may be desirous to proceed to China, are to be ready to embark on board the Atholl on or about the 12th Inst. R F Seale.

Apparently thereafter only 27 Chinese remained. Whether they continued living here or moved on is not known, with only one exception: in The ‘Blue Book’ for 1846 we find a record under ‘Pensions’:

An inch of gold won’t buy an inch of time.{c}

Aug. 16, 1819 - A very painful occurrence which has occasioned the death of two Chinese who were fired upon by a non-comd. officers party of chiefly St. Helena Artillery. On 31st July their contentions began to threaten serious consequences. Upon the interpositions of Capt. Shortis who assembled a party of soldiers, orderlies, stablemen and workmen employed about Plantation with some military workmen from High Knoll, tranquillity was assumed. The soldiers were scarcely withdrawn when a shout from one of the Chinese was followed by a number of others rushing out in a tumultuous manner. The soldiers returned and the Chinese again became tranquil.

On the following morning Capt. Shortis proceeded to town for the purpose of reporting to the Governor, ordering his Sergeant to keep his party on the alert. Soon after the Chinese upwards of 100 on one side and between 200 and 300 on the other commenced fighting, on which the soldiers marched down the hill. One of the Chinese parties immediately united with the soldiers. The other party dispersed in various directions and whilst several of them were scrambling up the opposite hill some stones were either thrown or rolled down, one of which it is said struck a Corporal. He immediately fired his musquet - his example was followed by the rest when two Chinese were killed. The Coroner’s Jury returned a verdict of murder.

Aug. 23 - Special Sessions - After a patient hearing of 14 hours the soldiers were acquitted.

The Chinese had assembled in large numbers with knives and other weapons and first attacked the soldiers (who were sent to quell the tumult) with stones and glass bottles.

In the mid 90s, a Chinese gentleman based in Manchester, Mr Yu Sang Lee, arrived to St Helena, investigating the possibilities to le-locate companies from Hong Kong to St Helena. At this time, Hong Kong was British Overseas Territory like St Helena but the transfer of the Territory to Communist Chinese rule had been decided and the uncertainty of the future made many Hong Kong citizens and companies to look for suitable new homes and locations around the world. St Helena was suitable as a small-scale safe haven for immigrants from Hong Kong. We were, and we are, a British Overseas Territory as Hong Kong, which the immigrants were used to. We have free trade with the European Union, which it was feared that Hong Kong would lose with the transfer to a new regime. A British Passport was also a future prospect for the people. The British Passport was a very important factor.

Mr Lee’s interest for St Helena followed a meeting he had with Mr John Clifford in London. Mr Lee had served in the Hong Kong Police prior his career in business and they met at a common police friend in Manchester.

The proposed clothing manufacturing was in a, for St Helena, grand scale. Mr Lee wanted to bring in 300-1,000 Chinese key personnel, including families to the Island but the mainstay of the workforce needed would be employed locally. According to Mr Lee, at least 300 Chinese were needed to make the proposal economically viable.

The factories would import raw materials from the Far East, assemble the products here and ship them to their markets, mainly in the EU and in the US. The Hong Kong companies promised to pay all development costs, including subsidies for additional doctors, policemen and teachers, needed because of the increase in population. One of the requirements stated by the investors was the acquisition of St Helena Nationality as soon as possible after 1997, as from that date the immigrants were effectively stateless. The time-scale for this development was very precise. The factory had to be up and running and the immigrants present on the Island well before 1997, the year when Hong Kong was transferred to Communist China rule. The proposal was discussed on the Island but Mr Lee had problems to get support for his and his principal’s ideas. With hindsight, Mr Lee’s ideas could have been a start for St Helena’s development and it would have fallen in well with the Island’s history - It would not have been the first time Asian workers had been taken to the Island to bring new skills and replenish the workforce. At the same time, the reluctance in St Helena to accept the proposal is understandable, as the massive change in the community must have seemed fearsome. Reading the proposal from Mr Yu Sang Lee it stands quite clear that the main purpose for the investment was to get people out of Hong Kong more than create a profitable business in St Helena and that, presumably, the immigrating workers and their families had to pay substantial amounts of money to come here instead of getting paid for their work. International politics very often create business opportunities.

Footnotes:
{1} Father of John Melliss.{2} @@RepDis@@{3} Extract from John Kerr’s 1819 painting of Plantation House.{4} Some have observed parallels with how ex-pats are employed on St Helena today (though at the other end of the employment scale).{5} Apparently forward planning was as lacking in 1811 as it often is 200 years later! ☺.{6} Today a ‘stoneblower’ is a machine used in railway construction to pack an area with small stones. Presumably in the early 19th Century this function was performed manually.{7} According to the Wiktionary a Pitcher is an (obsolete) term for A sort of crowbar for digging. Presumably in this context a ‘Picher’ is the man who wielded this crowbar.{8} This is sometimes claimed to explain why there are very few Chinese surnames on the island, though in our opinion it is more likely that the Chinese did not marry local people and children fathered by the Chinese were treated as illegitimate and retained their mother’s surname.{9} We are not convinced that these punishments are the same as being punished in the same manner as if the offender were a British Subject…{10} It is strange that the fine is denominated in Dollars. In the early 19th Century the circulating money on St Helena was somewhat eclectic! We guess that 2 dollars would have been around £8.00, i.e. around 5 months’ pay.{11} We assume this was some form of assistance fund for those workers who became sick and were unable to earn money for food, etc.{12} Governor Mark Wilks seems to have been a humanitarian.{13} That is, the economic decrease resulting from the departure of the troops after Napoleon’s death.{14} In the areas now known as China Lane and Drummond Hay Square.