Every week our two newspapers

Please note: for brevity we have used abbreviated titles for the newspapers discussed here. They should strictly be referred to as ‘The St Helena Sentinel’, etc.

Our newspapers each have a separate page on this site:

A newspaper is a device for making the ignorant more ignorant and the crazy crazier.{c}

Below: In the beginning… ‘The Bush Telegraph’ Four ‘Wirebird’s News Media Service And Finally…What had been painted? 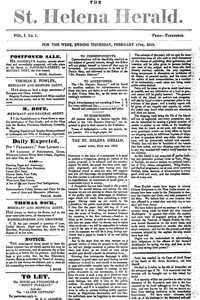 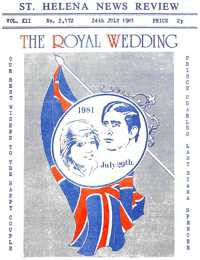 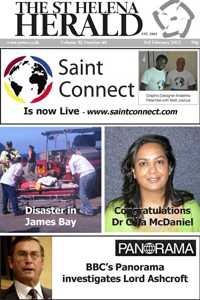 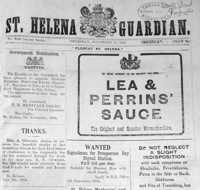 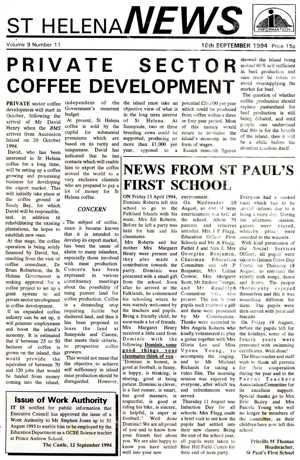 The St Helena Press was a private printing business set up by Saul Solomon in 1806, which produced a number of government-funded publications including The Government Gazette (from 1807) and The Monthly Register (from 1809). One of these, the Gazette, attracted world attention (sort-of):

St Helena can now, it seems, boast of an entire newspaper to itself! A weekly journal, entitled the St Helena Gazette, has recently started into existence on this sterile and isolated rock. It contains government notifications, advertisements, shipping reports, police cases, a price current, and extracts from the English and Cape papers.{d}

What is thought to be St Helena’s earliest true newspaper, The Advocate (also known as the Weekly News), was first published on 8th May 1851. The proprietors of the paper intended it should awaken and rouse the people of St Helena to a proper consideration of public affairs - to form a public opinion and to make their voice heard. It also contained many letters to the Editor - still today a popular means of expression. But they were not very successful - The Advocate closed down in 1853, largely due to it being pushed out of business by a new Government-run publication The Chronicle, which started in 1852.

In 1853 another independent newspaper, The Herald, was printed by Thomas Dick of Market Street, Jamestown with the bold statement To think as we choose, to write as we choose, to admit into the paper what we choose and to reject what we choose, claiming We will be responsible to nobody. A photo of the front page can be seen (left). The first edition sold out but the paper only ran until 1860 when the owner replaced it with The Record, which also came to a sudden stop in 1861 with no explanation - just a front cover stating that the next paper would be The Guardian. Several other short-lived private newspapers were also launched about this time: The Advertiser (1865-1866); The Star (1866-1867); The Spectator (1866-1868); Church News, The Mosquito{2} and The Bug (1888){3}; The Times (1889); The Monthly Critic and Flashlight (1891); and the St Helenian and Observer (1895). All of the latter were published to address some political issue of the time, and closed as soon as the issue was resolved.

The Guardian (right) set an island record for a private newspaper: it ran for a total of 64 years, from 1861 to 1925, covering everything from the closure of the ‘Liberated Africans’ Depot to the making of Ascension Island a dependency of St Helena, described in 1886 by Rev. John Walker in ‘St Helena as I saw it’ as a small four-paged fourpenny weekly journal published in the town, and evidently from its appearance and the tone of some of its paragraphs not a fortune-making venture for Benjamin Grant, its printer and proprietor.

In September 1921 Canon Walcott took over the Diocesan Magazine (started in 1899), printing it himself. He later renamed it the St Helena Magazine to allow himself more freedom of speech, whilst including a column called Diocesan Notes. He continued publishing it until his death in 1951.

The first issue of an independent newspaper, the ‘St Helena News & Comment’, was published on 30th July 1971 by Mr W C Beauchamp of Seaview. It was still printing in October but closed soon after.

Throughout this period the government of St Helena continued to publish a newspaper. At the instigation of Governor Harford the Chronicle became The Wirebird (monthly) from January 1955 until May 1966, then The News Review (left) (weekly) and eventually from 11th July 1986, The News (right) - the first island newspaper to use computer typesetting.

Another independent paper, the New Wirebird, was published from 14th April 1990, peaking at 550 copies per week despite being twice the price of the St Helena News (30p as opposed to 15p), but only lasted until 21st June 1991.

With effect from October 1999 the Government of St Helena passed control of The News to a new body which it created - the St Helena News Media Service (SHNMS).

The News published its last edition on 25th May 2001. Curiously, it did not mention its imminent demise!Ⓘ From 1st June 2001 The News was renamed The HeraldⒾ. This was the island’s only newspaper until November 2005 when The Independent was launched. Since then we have (almost) always had two newspapers… and since the closure of the Herald on 9th March 2012 St Helena no longer has a Government-published newspaper.

Extract from an announcement in the St Helena News Review encouraging readers’ letters:
Since this is a Government publication it would be desirable that prospective writers do not abuse a privilege extended by Government to indulge in overt or anti-Government political statements.

What is freedom of expression? Without the freedom to offend, it ceases to exist.{e}

Although not officially a St Helena newspaper, special mention should be made of ‘The Bush Telegraph’ (a.k.a. St Helena Command Magazine), which was produced by and circulated amongst the servicemen stationed here in World War 2. It first appeared in August 1943, edited by a Corporal Smith and published by Gunner L D Phillips. It was simply typed and duplicated and usually ran to 16 or occasionally 20 pages. Content included what was showing that week at the Paramount Cinema (which one week included a locally-produced stage play ‘Going Gay’ - but Gay meant something different in 1943), what was being served in the canteen, local sport reports and of course local gossip. It featured the poem shown on our Memories of St Helena page.

Perhaps surprisingly it also contained a fair amount of serious content. Reconstruction of society after the war featured. Religion was also discussed, usually from a pro-Christian standpoint.

There have been four different ‘Wirebird’ publications that should not be confused:

St Helena News Media Service (SHNMS) was set up by the Government of St Helena in October 1999 to own and manage its newspaper, the St Helena News{4}, and radio station, Radio St Helena. It set out to be The prime presenter of news, current affairs and entertainment in St Helena, in a factual and unbiased manner, leading to a self-sustainable service which caters for the ongoing needs of all stakeholders. It never achieved self-sustainability, always requiring a government subsidy of c.£100,000 per annum (2010 figures).

Originally SHNMS was funded by advertising revenue, supplemented by the Government of St Helena subsidy. In 2007, following the commencement of competition from SaintFM (2004-2012) & The Independent in 2005, the Government of St Helena commissioned a ‘Value For Money’ report into its subsidy. You can read the reportⒾ. As a result, from 1st November 2008 SHNMS was prevented from accepting paid advertising, and so was funded purely by the subsidy.

Although officially an independent body, SHNMS continued to be funded by, and its Board appointed by the Government of St Helena. See also the article ‘Censorship, St Helena Style’ about what could and could not be published in a Government-operated newspaper.

and Finally…What had been painted?

We came across the following in an old newspaper, and are curious to know exactly what had been painted to cause such anger. If you know, please contact us.

The following annual days celebrate journalism or address issues related to it:

Neither is actively celebrated on St Helena.

Below: Article: The St Helena Herald Closes List of newspapers to 1999

The St Helena Herald will print its last issue this week June 9, 2012; this happens one hundred and sixty one years after what is thought to be St Helena’s earliest newspaper first published in 1851 - the St Helena Advocate. The proprietors of the paper used it to awaken and rouse (the people of St Helena) to a proper consideration of public affairs[᠁]to form a public opinion and to make their voice heard, however this was short lived for the St Helena Advocate closed down in 1853 due to it being pushed out of business by a new Government run publication the ‘St Helena Chronicle’. In 1853 the ‘First’ Herald came to print with their bold statement think as we choose, to write as we choose, to admit into the paper what we choose and to reject what we choose[᠁]We will be responsible to nobody. The first ‘St Helena Herald’ sold out but the paper only ran until 1860 when the owner became the printer of the ‘St Helena Record’ this also came to a sudden stop in 1861 with no explanation just that of the front cover stating that the next paper would be the St Helena Guardian. The Guardian, however was to set an island record, for it printed and covered island stories for a total of 62 years from the arrival and departure of the Boer War Prisoners to the sinking of the Papanuii.

This tiny island of St Helena has seen many forms of media, all trying to provide and achieve the same goal: to provide the people of St Helena with an informative and entertaining form of media in which they too could have an outlet for their views and opinions whether concerning political issues or otherwise.

The current St Helena News Media Services consisted of Radio St Helena situated at Pouncey’s which became operational on Christmas day 1967 providing the island with its first operational AM radio service, with Christmas messages being recorded from friends and relatives overseas to hearing the Sunday service from different parishes across the island. The second island paper named The St Helena Herald was printed on June 1, 2000. Much younger than its radio counterpart The Herald turned 10 years old last year, an anniversary that was somewhat overlooked by many as the loom of closure hanged over management and staff for almost a year before this. A closure that resulted of yet another announcement of a new paper and radio service to start, The St Helena Broadcasting (Guarantee) Corporation (SHB(G)C). SHB(G)C is a government funded company that is planned to become self-sustainable after three years of operation, it officially became operational in February and will print its first paper within the coming month, the radio station will commence at a later date due to start-up processes. The Herald office at Broadway house will officially close on March 31, 2012 with the Radio St Helena still operating until later this year to continue a radio service to be provided until SHBC’s FM station is fully operational.

Taken from the PhD by Alexander Schulenburg, 1999{5}

News is something somebody doesn’t want printed; all else is advertising.{f}

Footnotes:
{1} Closed March 2012 but restarted April 2012.{2} Which publication apparently once printed a spoof advertisement Who Will Work For Nothing? Early application to be made to the Clerk of the Works, a comment on the poor wages paid to Government workers.{3} In The ‘Blue Book’ for 1888 Governor Grey-Wilson reported: Three additional newspapers were started during the year:- the ‘Church News’, for promoting the interests of the Church of England; the ‘Mosquito’, a comic paper; and the ‘Bug’, started to impeach the Government..{4} Later the St Helena Herald: it was renamed from 1st June 2001.{5} @@RepDis@@