Although St Helena is best known for the liberation of the enslaved, its earlier history is rather darker

Slavery (n): An institution or social practice of owning human beings as property, especially for use as forced labour.{b}

SEE ALSO: Our other enslavement-related pages: Slavery was practiced on St Helena, as described on our page Slavery on St Helena. St Helena’s role in ending the Transatlantic Slave Trade is described on our page Attacking the Slave Trade. The enslaved burials uncovered in 2006/8 are discussed on our page The Slave Graves. The terrible treatment of the enslaved resulted in many ghost stories about them and their mistreatment also features on our Titbits from the records page. 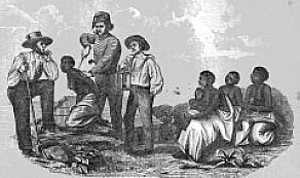 Although many of the ‘Liberated Africans’ were relocated away from St Helena, around 1,000 also remained and integrated with the local population, together with the approximately 1,800 freed formerly enslaved people already here. Add to this around 2,400 people of European descent (settlers + troops), a few remaining Chinese and you have the population of St Helena in the mid-19th Century. It is therefore often said that the genetic makeup of modern-day Saints can be defined by the three ‘S’s - ‘Settlers, Soldiers and Slaves’{1}. You can see the variety of ancestral origins in the saint faces shown below.

The following portraits were taken in the late 1970s and illustrate some of the variety of faces on St Helena{2}:

When the enslaved were freed they were often given as a surname the first name of their former owner. This explains the number of islanders with surnames like Benjamin, Duncan, Francis, George, Henry, Joshua, Lawrence and Leo.

Today Saints take an active part in work to eliminate slavery from the modern world. The Equality & Human Rights Commission runs awareness campaigns on slavery today. The International Day for the Abolition of Slavery on 2nd December is actively celebrated here, as was the 2007 Bicentenary of the Abolition of the Slave Trade in the British Empire.

Saints have also been active in opposing the plan to industrialise Ruperts because of the impact it will have on the ‘Liberated African’ sites and monuments in the valley.

A number of annual days mark themes related to slavery, which are observed to varying degrees on St Helena: 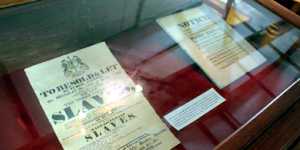 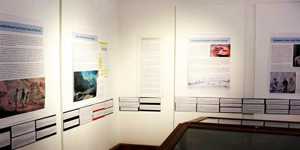 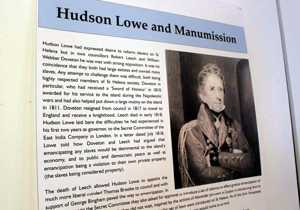 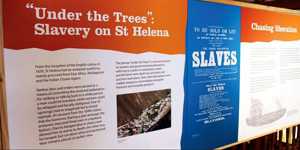 By Andrew Turner, published in The Sentinel, 10th September 2020{4}

A topic like slavery can often spark a lot of emotions. [And] for St Helena, it’s huge [᠁] many Saints can claim descendence from former slaves, which is something to be quite proud of.

An exhibition detailing St Helena’s history with slavery has recently launched in the Museum, Jamestown. 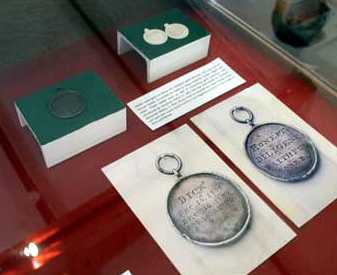 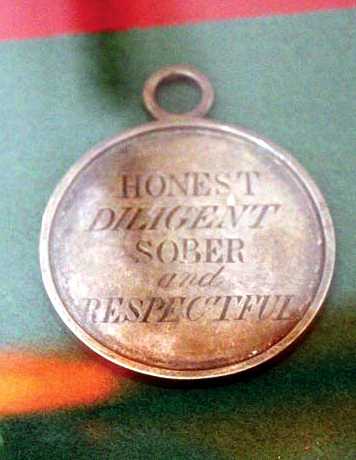 The exhibition covers St Helena’s history prior to the British Slavery Abolition Act (1833).

[St Helena was] part of the problem, but we weren’t unique as this was going on in every British colony, Museum Director Adam Sizeland told The Sentinel. From the very beginning of settlement there was an order that as [the settlers] came down to the island, they had to pick up slaves in West Africa to help grow things for the island.

Looking at it from a cultural and social point of view, many Saints can claim descendence from slaves, which is something to be quite proud of. These people went through centuries of oppression and managed to come out of it, and are quite a resilient community today - we can learn quite a lot from that.

The central feature of the exhibit is a timeline created by Annina Van Neel of the Equality & Human Rights Commission. The timeline starts from the island’s settlement, progresses through the initial laws governing slaves and ends at the eventual emancipation of slaves in St Helena.

It looks at various injustices and events where slaves were mistreated - it’s quite a lot, as you will be able to see, Adam said.

Other items include a copy of a poster (dated 1829) that advertises slaves for sale; and documents that describe how slaves were treated in St Helena.

There was a list of orders written up when the island was first settled regarding slaves and how they were to be treated, Adam said. It’s interesting to see the attitudes towards slaves at that time.

Rules included in case any negro slave shall presume to give any saucy or impertinent language or answer to any white person shall [᠁] be severely whipped in the presence of the party offended to his satisfaction.

Adam is hoping to soon install a message board at the end of the timeline, so people can express their own thoughts and feelings as part of the exhibit.

Adam said people may be especially inclined to contribute to the exhibit because the topic globally is receiving a huge amount of attention.

A topic like slavery can often spark a lot of emotions - many of the problems that have arisen out of slavery, and attitudes towards people of colour, are still prevalent today, Adam said. This year has seen a massive movement; so we want something there so people can engage a bit more with us, so we can get an insight into what people think.

The liberated Africans, who after the abolition of slavery were brought to St Helena from Slavers captured by the Royal Navy, are represented in a separate exhibition. That exhibition includes artefacts dug up during excavations at Rupert’s Valley, such as beaded jewellery and other small possessions.

The slave history of St Helena is also on exhibit throughout much of the island.

The history is particularly evident in Jamestown, where many of the buildings have entrances to slave quarters, segregated from the main entrances.

It’s unquestionable that slaves have had a hand in pretty much all the buildings [in Jamestown], Adam said. On Main Street you will see where the National Trust is, or Essex House - they all have the big ‘grand entrance’ with steps; and then tucked away in the corner, going into the ground, into the basement, is another entrance that would have been for the slaves.

It’s not like it was recorded to say ‘this building was built by slaves’ or anything like that, because in that time they were just doing the work and they weren’t recognised for that work, Adam said. The overseer would have been a white person - he was in control and it would have been ‘the construction was overseen by…’ They would never say ‘built by slaves,’ they just thought of that as an everyday occurrence - it wasn’t worth mentioning.

The exhibition can be found on the top floor of the Museum, which is open every Monday, Wednesday, Thursday, Friday and Saturday.

There is no funny image on this page. There is nothing funny about slavery.
The shocking thing about slavery is that it still goes on today{5}
To join the fight against slavery see the Equality & Human Rights Commission website. 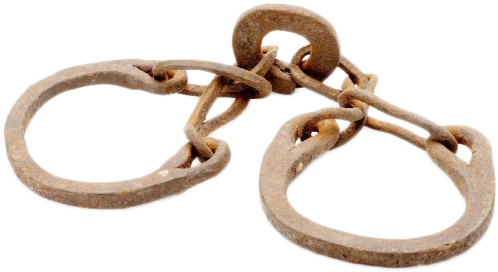 Credits:
{a} William Pitt the Younger, in his speech on the India Bill, 18 November 1783{b} en.wiktionary.org/‌wiki/‌slavery{c} en.wikipedia.org/‌wiki/‌Slavery

Footnotes:
{1} Though The Chinese Labourers brought in the early 19th Century also made a significant contribution.{2} If you or one of your relatives is shown here and you object to us displaying this image please contact us, identifying the image, and we will remove it.{3} In 2022 this was marked with an event outside The Cannister, linked to the recent reburial of the ‘Liberated Africans’ exhumed while Building St Helena Airport.{4} @@RepDis@@{5} In 2019, approximately 40 million people, of whom 26% were children, were enslaved throughout the world.{c}.