St Helena has two weekly newspapers: The Independent and The Sentinel. 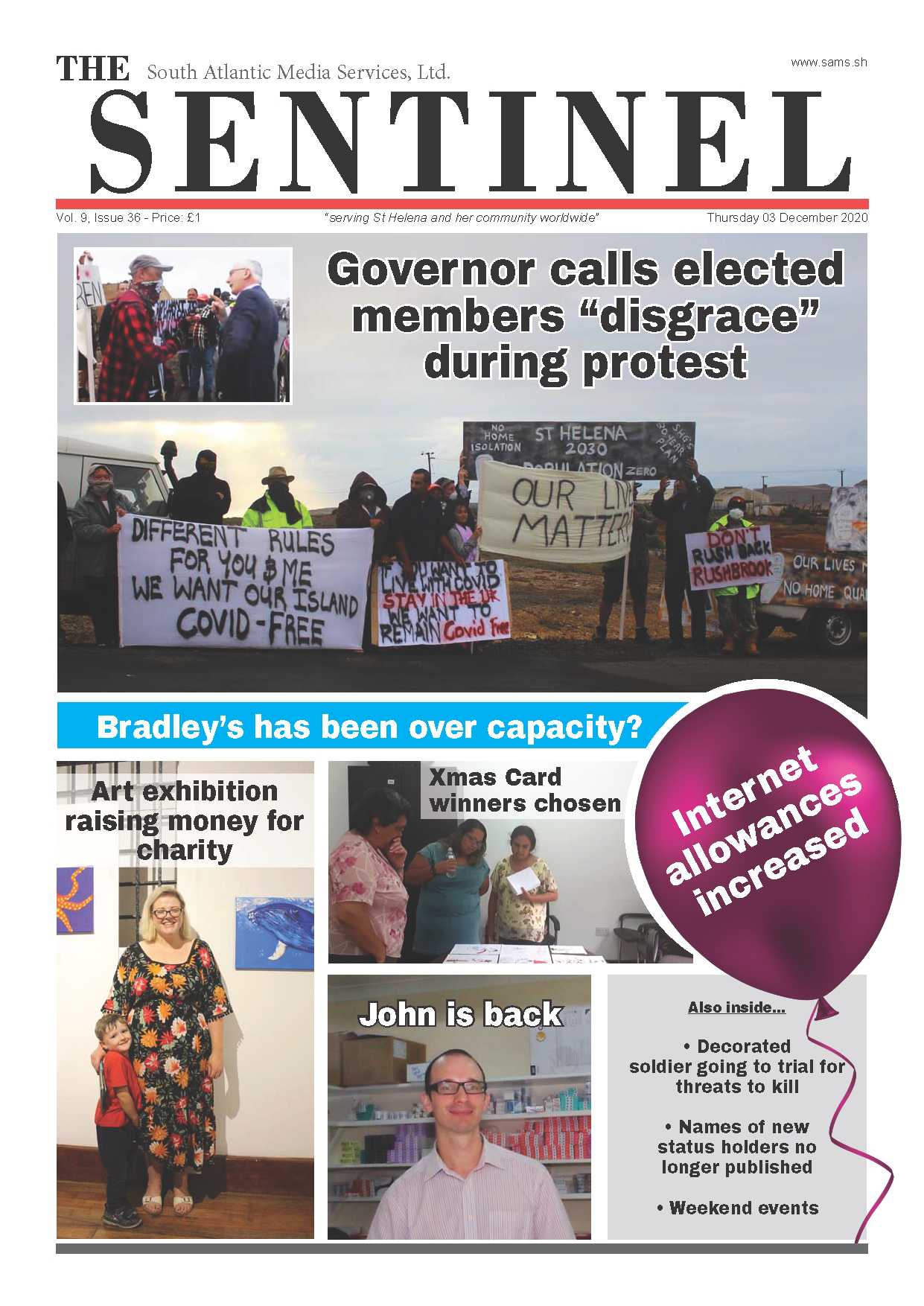 The Sentinel’s front page has photographs and an introduction to the main stories contained within. There is no editorial as such but a ‘Comment’ is published every week by a member of the South Atlantic Media Services Ltd. (SAMS) team. Most articles are authored by members of the South Atlantic Media Services Ltd. (SAMS) team, though contributed articles are also published. Other regular features include a photograph of each baby born in the week together with a brief description; letters to the editor and a children’s page. The paper’s focus is on Saints’ news and features tend to concentrate on Saints, at work and at play, and St Helena history. It follows the convention of most UK tabloid newspapers of having sports news at the back. It is prepared to challenge the actions of Government but aims to be balanced, constructive and positive.

The Sentinel publishes on a Thursday. The printed version is available island-wide by lunchtime. For a small fee you can have your weekly Sentinel emailed to you on the Thursday of publication.

Download the most recent Sentinel (usually available online on the Monday following publication).

You can have a copy of The Sentinel (in colour!) emailed to you every Thursday, for a smaller fee than the cover price. See the SAMS Website for details or contact SAMS.

As at September 2021 The Sentinel was charging £50 for a full-page; £25 for a half-page; £10 for a quarter-page; half-price for Registered Charities.

The Sentinel was launched on 29th March 2012 by what was then known as ‘The St Helena Broadcasting (Guarantee) Corporation Ltd.’, later renamed South Atlantic Media Services Ltd. (SAMS). In the opening editorial its editor wrote: My team and I aim to create a forum that allows and encourages fair and balanced debate of all sides of these issues. A properly informed community will be better placed to decide the course for St Helena to steer. Editors have changed since but the ethos of the newspaper remains the same.

By Andrew Turner & Emma Weaver, published in The Sentinel,5th November 2020{2}

SHG has just begun consultation on this new Draft Immigration Policy, which includes provisions for a Fast-Track Residency Scheme, which would allow ‘high net worth individuals’ to get Permanent Resident status in exchange for making ‘substantial financial investment in the island.’

According to the draft policy, this provision still needs approval from the UK Government. Permanent Resident status is a new concept for St Helena.

While the draft policy allows wealthy people to purchase this status, others could attain it by completing four years’ stay in St Helena.

Anyone with Permanent Resident status would be able to stay in St Helena for as long as they like. They would have access to local rates for healthcare, but would not be able to access social security.

The policy does not state whether Permanent Residents would be allowed to vote or run for council. To discuss the draft policy, the Immigration Working Group is conducting a series of public consultation meetings and drop- in sessions. These began Monday, Nov. 2 and further information can be found within the Notice Board section of this newspaper.

According to a 2018 Business Insider report, around 23 countries at the time were offering citizenship or residency by investment. For a lot of wealthy people, having a second or third passport is important for the ability to travel, an international advisory specialist in the topic told Business Insider. For some it’s also a status symbol, like buying a fancy car to show your friends. Apparently residency/citizenship by investment can also alleviate tax requirements for the wealthy.

Second citizenship is becoming more than just getting a passport, the specialist said. There are certain advantages towards using second citizenship to create residence in countries where tax burdens would be lower than where you are at the current time.

Thailand, Latvia and Greece were the three countries where it was cheapest to purchase residency (£11,793-£225,656) and New Zealand, Australia and the United States of America the most expensive (£388,858-£1.54million)

Footnotes:
{1} Making it the island’s only truly independent newspaper.{2} @@RepDis@@