An independent newspaper in association with SaintFM and St Helena Online

St Helena has two weekly newspapers: The Sentinel and The Independent. 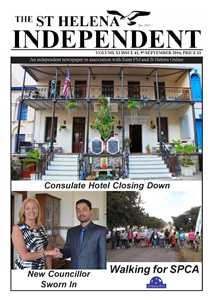 The Independent has a pictorial front page, editorial, articles usually authored by members of the Independent/SaintFM Community Radio team with some contributed articles, and letters to the editor. The Independent publishes submitted news and opinions, many of which are openly challenging of government policy and practice. Much space is given to events in the UK Parliament and their relation to St Helena.

On 13th May 2022 The Independent started producing its printed edition partly in colour, charging £75/page for colour advertising (£50 for monochrome).

The Independent publishes on a Friday.

As at July 2022 The Independent was charging £50 for a full-page monochrome/£75 for colour; pro-rata for smaller.

The Independent was launched by SaintFM (2004-2012) on 11th November 2005, originally only published on the Internet. The first edition contained just 11 pagesⒾ, three of which were adverts for SaintFM (2004-2012)! On 27th January 2006 the first printed edition went on sale. It only printed 100 copies. It later grew to compete with The Herald.

Following this announcement, on 23rd March 2012 it was announced that The Independent would close the following week. More in the article below. However, following discussion with advertisers, vendors and printers The Independent recommenced publication on 27th April 2012.

On 13th May 2022 the St Helena Independent became a limited company owned by Mike Olsson and the Editor, Vince Thompson.

To reach The Independent:

The Independent’s offices are behind the Bridge Memorial Clock, but it can also be contacted via SaintFM Community Radio.

In March 2017 it was announced in The Independent that SaintFM Community Radio and The Independent would henceforth be funded by Lord Ashcroft, in a 3-year deal. Details of the agreement{1} were not disclosed. The agreement was renewed for a further three years in January 2020, again with no details being disclosed.

In March 2022 the St Helena Independent reached a deal with Lord Ashcroft which replaced the recurrent support with a contribution towards the capital cost of the in-house printing facilities.

A very great part of the mischiefs that vex the world arises from words.{c} 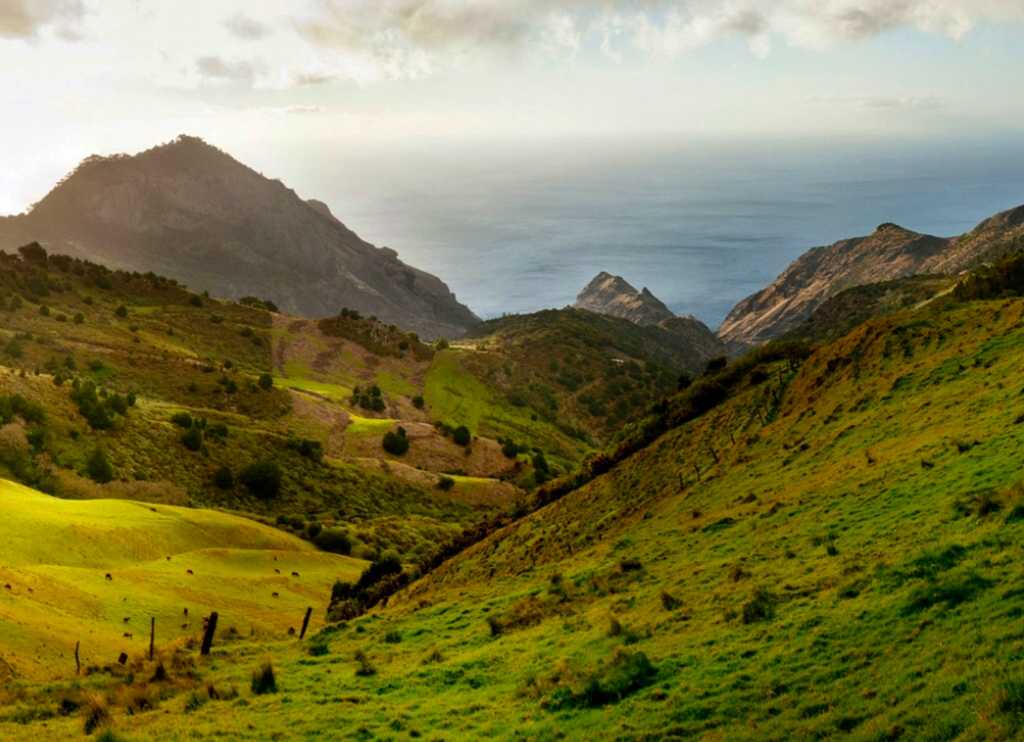 The UK’s remotest dependency is poised to enter a brave new world of private enterprise. But the transition is proving painful

There has barely been such a hubbub on St Helena since Napoléon Bonaparte turned up on its volcanic shores four months after being defeated at the Battle of Waterloo. The tiny and remote south Atlantic outcrop, which is home to a population of just over 4,000 ‘Saints’ and is presently reachable by a 2,700Km boat journey from Cape Town, is bracing itself for a shockwave to its culture and traditions.

Supported financially by Britain since The East India Company first colonised it in 1658, St Helena is about to reject its dependency on hand-outs by introducing air travel to an island which was described [by the author Julia Blackburn] as being further from anywhere than anywhere else in the world.

Work has begun on building an airport - the biggest infrastructure project the island has ever seen - which will open in 2015 with the potential for creating a tourism industry which might bring 30,000 visitors a year, if projections are correct. They will be tempted by dramatic walks in St Helena’s spectacular tropical interior, the chance to fish for tuna and blue marlin and to swim from the coast of an island that is 700 miles from the nearest land (Ascension Island). Then there is Longwood House, a French government-owned property where Napoléon died after six years in exile. Visitors might like to savour the St Helena coffee, for which Bony developed a taste.

But as the authorities try to introduce private enterprise, St Helena’s last independent newspaper has been silenced.

The suspicion among islanders is that the government is quietening a critical voice to ensure that potential investors in the new economy can expect a favourable reception.

There also remain doubts that a community that has been in receipt of £30m-a-year from the British Government (St Helena is the most costly of Britain’s 14 overseas territories) will be able to survive through private enterprise.

Measuring 10 miles by 6, St Helena is 1,800 miles from South America and 1,200 from Africa. The transport service is the pensionable Royal Mail Ship which docks once a month from South Africa.

The airport, which will allow flights to arrive from South Africa, has been given enthusiastic support by the billionaire Conservative donor Lord Ashcroft.

The Tory peer, who visited the island as a small child and recalls a family tale of how he fell in Napoleon’s fish pond, has flown over the island in a ‘one-man protest’, giving an interview from his private jet to local radio and bemoaning the fact that he was unable to land.

Labour shelved the airport plan when in power - but it was revived by the Coalition government after David Cameron entered Downing Street.

Simon Pipe, a former BBC journalist who runs a website on St Helena called The Gates of Chaos{3}, said: It’s a massive challenge to the culture. These are wonderful people but they don’t know how to run a business and take the initiative. Those who do take the initiative have left the island and moved to Swindon. (A generation ago, almost 1,000 St Helena exiles settled in Swindon - or ‘Swindhelena’ as they call it - following word-of-mouth about the town’s employment prospects.)

For private business to take off in St Helena, the island’s government needs many of those Saints to come home and bolster the service industries on which the new tourism sector will depend.

But as the Diaspora of Saints look for latest news of these tumultuous times in the island’s history, the news is hardly reassuring. The territory’s only independent newspaper, The St Helena Independent, closed down last week in a fit of high dudgeon. Independent closes down, read its final front page. Congratulations to St Helena Government! Every time private sector shows its ugly face we shoot it down. 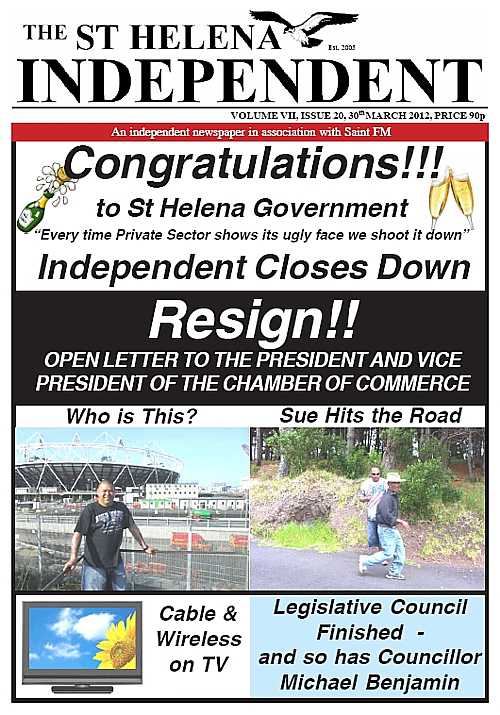 It was hardly the message the island’s administrators wanted as they prepare to embrace capitalism. The government, which operates from a building known as The Castle in the island’s Georgian capital of Jamestown, has decided to sink about £250,000 of public funds into subsidising a new, rival media empire.

The state-funded St Helena Sentinel debuted on the news-stand last week with an altogether more positive message: On the Starting Blocks, and a picture of a young Saint preparing to run in a school sports day.

Some islanders accuse St Helena’s governors of wanting to oversee this period of change with a minimum of criticism.

Certainly that is the view of The St Helena Independent’s founder Mike Olsson, a Swedish immigrant who fell in love with the island and decided to stay. A pioneer, he first set up a radio station SaintFM (2004-2012). He began receiving so much news that he began printing The Independent six years ago. By the time of its last issue, the 90p paper was selling more than 1,000 copies a week and it is credited by supporters with having broken a culture of censorship on the island.

But Olsson was not everyone’s cup of St Helena coffee. The 49-year-old is something of a maverick who used a picture of a monkey at a typewriter to illustrate his editorials, which often irked St Helena’s leaders.

Olsson, who produces the paper with a staff of three, claimed that the government’s decision to launch the Sentinel contradicts its aims of encouraging private enterprise as the island prepares to welcome air travel. What they’ve done is completely against their own policies, he said. The government media, with huge subsidies is allowed to compete for private sector advertising. He has closed down his paper in protest at what he sees as unfair competition.

Vince Thompson, The Independent’s star columnist, said in a telephone interview that the government should be spending its money on more important services, such as hospitals and its under-performing schools.

My bone of contention is that education and public health have got to be much higher priorities than the government pandering to its pet media project, said Thompson, who defended his paper’s sometimes spiky approach.

It’s an important job to question and raise alternatives, especially in a remote society like Saint Helena where the normal democratic institutions are not so well developed.

But over at the Sentinel, which sells for £1 and is loaded with adverts for local barbecues and fitness classes as well as offers for public sector jobs on St Helena and Ascension Island, Darrin Henry claimed his paper would not be subservient to the island government, in spite of its public funding.

The day a government official tells me we can’t print something, or there is any hint of censorship, I will leave, he said. Henry, who is a native Saint and has a background as a professional photographer, has a young editorial team of five. We are aiming to build something long-term which is a very credible news service for the island and our Diaspora, he said. Henry, the chief executive of the broadcasting corporation, will also run the publicly-backed FM radio station which will shortly replace the state-backed Radio St Helena medium wave service and will threaten the future of Olsson’s SaintFM (2004-2012).

Swindhelena is not sure what to make of it. Jonathan Clingham, a St Helena-born IT consultant now living in Wiltshire, said he reads The St Helena Independent online and that its closure had come at a critical time in the island’s history. With the upcoming airport project a lot of people are interested in going back to the island. Without The Independent our main source of information is cut away.

Later this month, a digital television service will launch on St Helena, offering BBC World alongside sports and American entertainment channels. But few Saints can afford the island’s slow and expensive broadband connection.

Inside The Castle, the St Helena government is anxious to downplay the drama, insisting it had no intention to close down The Independent when councillors voted to set up the new media service. Neither do they wish to transform an island culture which is seen as St Helena’s biggest attraction to potential visitors. What we want to do, said a government spokesman, is maintain the community spirit and ethos and traditions that are part of the island’s heritage.

Footnotes:
{1} In particular, whether any editorial control was included.{2} @@RepDis@@{3} Later renamed St Helena Online and no longer run by Simon.