This page records the events held marking the Bicentenary of Napoleon’s time on St Helena{1}. Unfortunately the events held in 2021 were severely impacted by the global pandemic.

Below: French Visitors Bicentennial Commemoration Napoleon’s Arrival Commemorated at his Tomb 200 years on, Napoleon steps ashore once again Letter of thanks Napoleon moves to Longwood House

On 7th October 2015 a delegation from France including members of the Fondation Napoléon, the Souvenir Napoléonienne and a representative of the French Minister of Foreign affairs arrived on St Helena for the anniversary of Napoleon’s arrival here 200 years ago, on board HMS Northumberland.

Among the celebrations is the official re-opening of Longwood House and in particular the ‘Generals’ quarters’ after the program of renovations there that has been funded by the international appeal coordinated by the Fondation Napoleon.

A Bicentennial Commemoration of Napoleon’s exile to St Helena took place at Napoleon’s Tomb on Sunday 11th October 2015 at 3pm.

Dale Bowers led the Commemoration with Prayers, followed by a one minute silence signalled by the playing of Aux Mort’s by Graeme Beckett.

The UK and French National Anthems were then sung by choirs Bug Eye Tuners and Palm Villa Singers, accompanied by brass band The Brass Monkeys.

The anthems were followed by the Laying of the Wreaths, led by His Excellency the Ambassador Jean Mendelson, representing the Minister of Foreign Affairs and International Development of the French Republic, His Excellency Governor Mark Capes, M. Victor-Andre Massena, Prince d’Essling and President of the Napoleon Foundation, M. Jean Etevenaux, Vice-President of the Souvenir Napoléonien and representatives from the Companions de l’Aigle.

Shelby Bargo, Jade Leo and Teeny Lucy drew the ceremony to a close with a musical recital on strings.{g}

Napoleon’s Arrival Commemorated at his Tomb 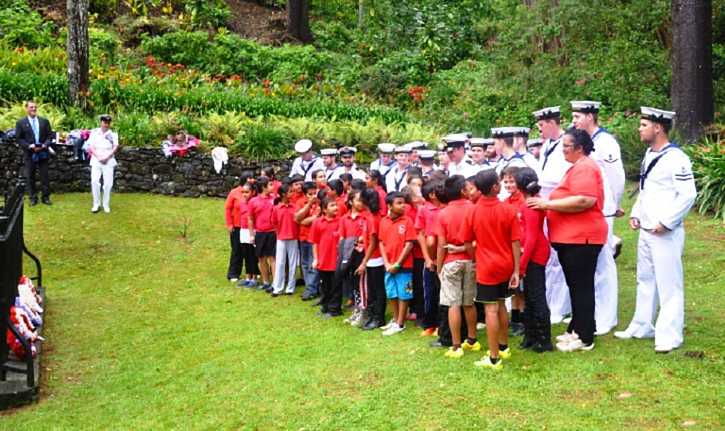 At 10am on 15th October 2015 a short and simple ceremony was held at Napoleon’s Tomb to mark the Emperor’s arrival in St Helena on 15th October 1815. Those attending included leaders and representatives of the Fondation Napoléon, the well-established charitable organisation committed to study and research of Napoleonic history and preserving his heritage. Present at the ceremony were Mr. Thierry Lentz, the Director of Fondation Napoléon, Mr. Jean Etévenaux, Vice President for Souvenir Napoléonien, Mr. Victor-André Massena, Prince d’Essling, the President Fondation Napoléon and Mr. Jean Mendelson, Diplomat and representative for the French Foreign Ministry and International Development.

The Fondation has been closely involved with preserving and improving the French Properties in St Helena. Others attending were the governor and the ships companies of HMS Lancaster and RFA Gold Rover. Graeme Beckett was present to sound the bugle. A minute’s silence was observed followed by wreath laying; no speeches were made. When the ceremony ended people watching from the observation point above the Tomb were allowed below into the Tomb area. 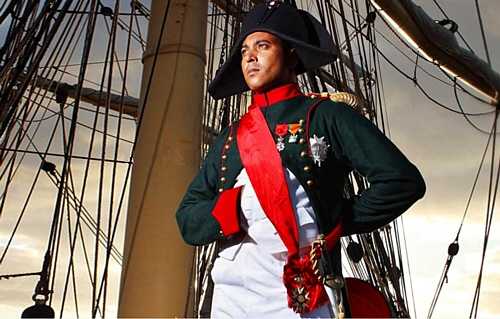 Two centuries have passed since Napoleon stepped ashore on St Helena on the evening of 17th October 1815, bringing the island global fame that has endured ever since.

At about 6pm on 17th October 2015 that transforming moment was re-enacted by island actor Merrill Joshua, decked in full imperial costume: the culmination of a series of celebrations and commemorations.

The event re-enacted the portrayal in the 1970s BBC film ‘The Man On The Rock’, by Kenneth Griffiths.{h} 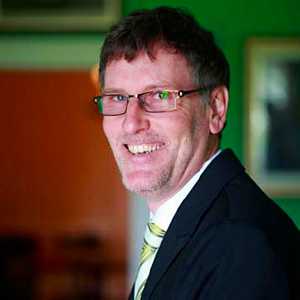 The group of French and the official delegation have now left the island. Although the visit started by a disappointment when it was announced the commemorative stamps and coins had not arrived on the island, it was overall a great success for the promotion not only for the French properties but also for the island as a whole.

The bicentenary of the arrival of Napoleon was organised with the Tourist Information Office in a professional, respectful and efficient manner. Helena Bennett and her team have just been perfect. From the comments made by the group, the words ‘respectful’, ‘dignity’, ‘efficient’, ‘courteous’, ‘pleasant’ were used non-stop.

Without the Tourist Information Office team I would have never been able to deliver so much. The whole group has left with life-time souvenirs. And of course, Merrill Joshua a.k.a. Napoleon was just perfect in his role. But, this was not all.

The efforts made by various shops and organisations were so appreciated by our visitors. I have already seen pictures of the widows of the Art and Crafts and the Rose & Crown all over the French social media pages and always with praises and compliments.

Likewise, the kindness of individuals like Harry Legg who allowed the group to visit his historical dwelling of Alarm House, Helen Lawrence who invited the whole group for an unexpected but so welcome tea, coffees and amazing cakes (specially the chocolate one !) at Maldivia, Áine O’Keeffe who shared her art show and birthday party with the whole group, Graeme Beckett for his enthusiasm and communicative love for military music, and Paul Starkie for his warm welcome before the projection of the movie ‘The Man on the Rock’.

Moreover, through the recently restored Longwood House the French group and official delegation were able to see for themselves the skill of the local craftsmen and entrepreneurs. The name of Charlie George kept being mentioned as he did with Damian Stroud, amazing wood works there. Likewise for Brian Yon who brought everything and everyone to light.

The delegation also appreciated and praised the kindness of the people of St Helena they met during the food festival and the ones they had to deal with: the resourceful Foxy’s team, the smart Pennell Benjamin, the so-reassuring team of the enchanted isle, the unequalled tour operator Aaron Legg, the bilingual Lord Bishop and the master of ceremony Dale Bowers.

Regarding the activities, the nine days of their stay were extremely busy as the Cancer Support & Awareness group had the kindness to theme their activities around the bicentenary. The Regency Ball at the Castle was a huge success!!! But not only this it was also a pleasure and an honour for me to host the Pink Walk tea party at Longwood house. In this abundance of activities, the reception at the Briars Pavilion by His Excellency the Governor came through like a shooting star in this austral sky.

Then, as a surprise for all of us, was the visit of the Royal Navy with the HMS Lancaster and RFA Gold Rover. What wonderful news. His Excellency the Governor Mark Capes suggested the idea of such a visit over a year ago. I am so happy he had been heard as the navy added the glory and dignity to the celebrations.

In spite of the short notice, the deputy-Governor, Sean Burns together with his wife Marina and his assistant Sandra Sim made everything looking like it was long time planned.

On 10th December 1815, Napoleon moved from The Briars Pavilion to Longwood House, where he lived out the remainder of his days until his death on 5th May 1821. Today, 200 years later, the official Bicentenary Napoleon donned his uniform and visited the 3 Napoleonic sites on the island.{i}

In January 2019 it was announced that a ‘Visioning Group’ had been established to commence planning for the bicentenary of Napoleon’s death. The group was tasked with creating the vision and articulating it in a high-level document to be ready by the end of April 2019. 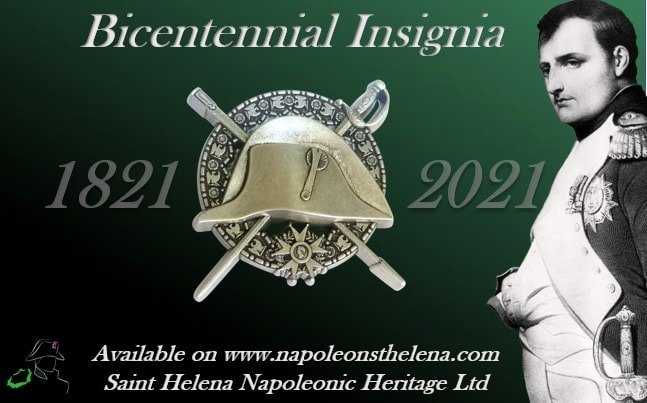 Napoleon on Saint Helena announces that the Bicentennial insignia are available to purchase on its website.

They are sold for £15 + postage and are shipped from Europe.

They are made in France and all the proceeds go to the St Helena Napoleonic Heritage, a charity that preserves the memory of Napoleon on Saint Helena by maintaining and restoring of Longwood House, the Briars and the tomb.

Launch of the ‘Napoleon 200’ Campaign

The Trust is a new UK registered charity, set up by the Government of St Helena in 2019. Its chair of trustees is author and former head of the European Investment Bank Sir Brian Unwin. Other trustees include TV historian Dan Cruickshank, Times writer Michael Binyon, and Kedell Worboys, SHG representative in the UK.

Go to www.napoleon200.org for further information.

To mark the 200th anniversary of his death in 2021 commemorative Postage Stamps were issued:

It had been hoped that the global Covid‑19 crisis would be resolved in time for the bicentennary events to take place ‘as normal’. Unfortunately, as at the beginning of May 2021 the pandemic was still disrupting international travel, with flights via South Africa still suspended, so as with many other events, physical celebrations were largely replaced by virtual ones.

At that time Covid‑19 had still not spread on St Helena so local events were possible but without the expected flood of visitors from overseas. A ceremony was held at Napoleon’s Tomb, starting at 17:15h on 5th May 2021 and a larger ceremony was held at the Tomb on Sunday 9th May, beginning at 14:50h. The island’s Catholic Church held a Remembrance Mass on May 6th.

From 2013 the Tourist Information Office ‘employed’ (in a strictly honorary capacity) a Napoleon Impersonator - someone who dressed up as Napoleon and appeared in Napoleon-related island events. Incumbents were Andy Crowe (an ex-pat housing executive), Merrill Joshua (a Saint employed by the Tourist Information Office) and from October 2019, Kenickie Andrews (also a Saint, part of the St Helena National Trust Marine Team) (photos below).

Some controversy arose when the post was advertised in 2019 because the advertisement required that the candidates be male. This would be contrary to employment law in the UK, but was apparently entirely legal on St Helena at that time.

This year marks 200 years since Napoleon was exiled to St Helena. The Island recognises this significant historical moment and the first part of the Napoleonic five year programme of events has been drafted by the Tourism Office, in collaboration with the French Consul and other local and overseas organisations.

This includes launching the Bicentenary Logo on Monday 2nd March marking the start of the programme. The intention with the logo is to unify the Island in acknowledging the importance of the 200th year and provide opportunities for businesses to enhance their retail offering.

Tourism Office Manager, Helena Bennett and French Consul, Michel Martineau, told SAMS on Monday about a competition. They are looking for the best renditions of the logo, which can be found on the sthelenatourism.com website or from the Tourism Office. Entries must be handed in by Friday. The best three wins prizes and everyone is encouraged to participate. Businesses can contact Tourism for a copy of the new logo to put on their emails. The first business to attach the new logo will win a special prize.

The 2015 programme of events covers Monday 2nd March to Sunday 18th October and the Tourism Office stresses that details may change. The programme will continue thereafter to 2021, which will denote the 200th anniversary of the death of Napoleon.

The next event is the Commemoration of the Death of Napoleon, Moment de Memoire, on Sunday, 3rd May.

Footnotes:
{1} Not every event listed; just a selection to give a flavour.{2} @@RepDis@@