This is a series of articles, first published in The Sentinel, about plants that grow wild on St Helena and which are reputed to be good to eat and also sometimes to have properties beneficial to your health. In the ‘before days’, when seeing a doctor was much harder than it is today and when medicines were unaffordable to ordinary people, a lot of use was made of herbal remedies, using plants that grow wild across the island. The aim of these articles is to document these uses before the knowledge dies out. So with each article we will feature a plant that can be found growing wild on St Helena and talk about what the previous generations used it for.

The knowledge part of the article comes from Stedson Stroud. John [editor of this website] is merely the author - and guinea pig! If you have any feedback on what we’ve written or any suggestions for plants we might feature please contact Stedson{1}

Before you read further please note these guidelines:

At the time of writing the series is ongoing so please check back for new additions. 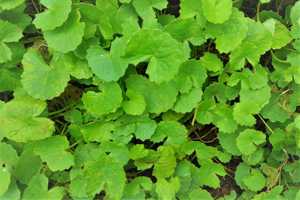 The leaves are quite distinctive and give the plant its popular name. It spreads vine-like and has small reddish flowers. You can find it described more fully on page 400 of Phil Lambdon’ Book{2}. There are photographs there and there is also the one on this page.

So much for what it is, but why is it interesting? Well in its native India, the leaves are much used in salads, where it adds an interesting additional texture - it’s crunchy - and flavour - it has a carrot-like taste. It can also be used to treat various skin conditions, and was even, historically, claimed to be effective against leprosy. It has long been valued in eastern cultures, and has gained popularity in alternative therapies in the west under an Indian name, gotu kola.

Get some and add it into your next salad! 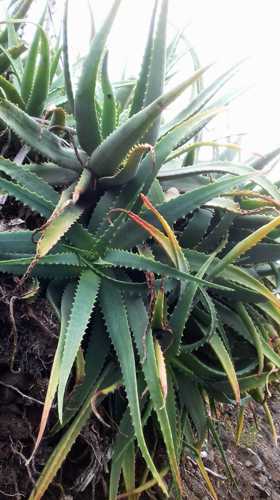 If you buy an expensive skin cream in the UK it probably contains Aloe Vera. Here you can get Aloe Vera for free! It’s known locally as the sick reviver plant.

Aloe Vera (Latin name Furcraea foetida) grows well in the drier parts of the island, often in quite large colonies. It is distinctive because of its tall flower stalks - easily 10m high. The leaves are also distinctive - leathery, almost 3m long with a spongy feel, in a V shape with spikes on the ridges. When broken, oil can be squeezed out, which is the active compound. You can find it described more fully on page 474 of Phil Lambdon’ Book{2}. There are photographs there and there is also the one on this page. It is particularly abundant in Ruperts, around the former ‘slave hospital’ - it was used to treat illnesses amongst the ‘Liberated Africans’ housed there.

So much for what it is, but why is it interesting? Well if the stories are to be believed it’s good for a variety of skin conditions, but other issues too. For skin conditions simply break the leaf and spread the oil on the affected area. It helps with pretty much anything including bruises, eczema, ringworm and other irritations, joint inflammation, insect bites and even to control bleeding, which is why it is an ingredient in so many expensive skin creams. It can also be swallowed, but only in very small quantities (0.1-0.3g) where it acts as a laxative or for other stomach disturbances (NB it should NEVER be taken by pregnant women). 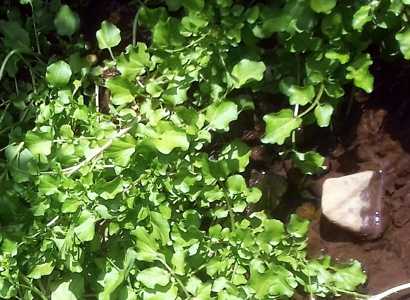 Watercress (Latin name Rorippa nasturtium-aquaticum) can grow wherever there is a source of shallow flowing water. It is mostly found in the French’s Gut, Broad Gut (in Levelwood) and Swanley Valley. It is basically the same plant as the Watercress grown widely in Britain and was naturalised here more than 150 years ago. Melliss in 1875 states that locally-grown Watercress was sold to passing ships as a fresh vegetable.

The leaves are hairless, spaced and up to 20cm in size, on upright pale green stems. The best way to describe them is that they look edible! It usually roots close to or in the water. Those familiar with watercress in the UK will find ours a somewhat paler colour, possibly because we have stronger sunlight. You can find it described more fully on page 279 of Phil Lambdon’ Book{2}. There are photographs there and there is also the one on this page.

So much for what it is, but why is it interesting? Well experience shows it is a great addition to any salad, and can be used in sandwiches - it goes especially well with cheese. It also makes a great soup, and can be fried or steamed and used as a vegetable. Stedson puts it (with Purslane) in Kedgeree. Watercress also contains many useful vitamins including A, B6, C, E and K (good for blood clotting and healthy bones) and essential minerals such as magnesium, phosphorus, potassium, sodium and copper. It also contains important antioxidants which are understood to be good for general heath, particularly of the heart. 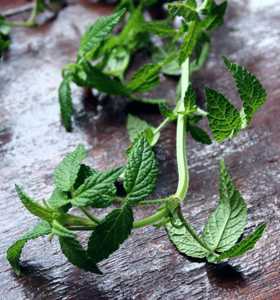 Balm of Gilead (Latin name Cedronella canariensis) used to grow widely on St Helena but now it’s restricted largely to the Peak Dale area with some found at West Lodge and Napoleon’s Tomb. But it’s certainly worth seeking out.

It looks at first like mint, with the same patterned leaves, though they are longer and thinner. Some say it looks a bit like the cannabis plant, but it isn’t related. It’s a scrambling semi-woody plant and has a Camphor-like scent, or some say between sage and lavender with a sharper lemony note. It has pink orchid-like flowers. You can find it described more fully on page 337 of Phil Lambdon’ Book{2}. There are photographs there and there is also the one on this page which we took ourselves from a cutting collected by Stedson. It was introduced here from the Canary Islands but escaped into the wild and, according to ‘St Helena: A Physical, Historical and Topographical Description of the Island, including the Geology, Fauna, Flora and Meteorology’, by John Melliss, published in 1875, it grows wild, and is common in some localities. It is not the same plant as the Balm of Gilead referenced in the Bible.

It has a strange taste - slightly medicine-like but not unpleasant. It is useful as a general tonic and pick-me-up, and was formerly given to mothers after childbirth to help with recovery. It is also used to make a tea, mixed with chopped lemon grass and, if you want, sweetened with honey, which can be drunk hot or cold as a refreshing drink. Stedson uses it to flavour omelettes and to add tang to a Gin & Tonic.

Another use is as a mosquito repellent. Either crush the leaves against your skin or hang it in the room and it keeps those pesky mosquitoes at bay. Also if you crush the leaves and inhale the scent it can help clear a stuffy nose.

It can be dried to preserve it and if you can’t collect your own it is sometimes sold dried in the local shops.

First published in The Sentinel 5th May 2022. 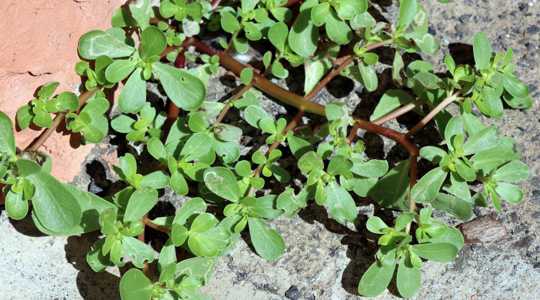 Purslane (Latin name Portulaca oleracea) grows widely in the lower drier areas of St Helena; particularly in Jamestown, Ruperts & Half Tree Hollow. It actually prefers poor soil! It’s a succulent (which means it holds a lot of water) - that probably how it survives living in the driest parts of the island. It grows ‘prostrate’, i.e. along the ground rather than upright. It has smallish hairless green leaves - about 1cm across - growing in clusters. The pinkish stem is distinctive. You can find it described more fully on page 130 of Phil Lambdon’ Book{2}. There are photographs there and there is also the one on this page which we took ourselves on the roadside in Napoleon St.

So much for what it is, but why is it interesting? Well if the stories are to be believed it is useful as a general tonic and pick-me-up, is high in Omega-3 (good for brain function) and may be helpful to type-2 diabetics in regulating their blood-sugar levels (but see guideline 2 in the text box). It is mentioned in ancient Chinese medicine texts and the native North Americans used to collect the seeds and grind them to make flour. African tribal peoples cooked it as a vegetable. In Palestine they used it to address kidney weakness. Other claimed properties include addressing issues as diverse as ulcers, eye diseases and asthma. Apparently if you feed it to hens you get eggs that are high in Omega-3! As far as we can tell there is nobody that it is bad for.

So if it does all that good, it must taste awful, surely? Absolutely not! It doesn’t have a strong taste but in a simple test (using the sample Stedson gathered from just outside my house) most people said it tasted similar to lettuce.

The problem with collecting it from the roadside is the dirt and pollution from passing cars, but it grows quite widely in the lower areas at this time of year so you should be able to get some quite easily.

I will certainly be adding it to my diet. My plan is to grow my own (it propagates from cuttings or you can collect the seeds) and to add it into salads.

More about health in St Helena on our Health Issues page.

Footnotes:
{1} We have not included his contact details because of the activities of spammers and scam artists. Stedson Stroud is very well-known and most people will know how to contact him. If you don’t please contact us and we’ll pass on your comments.{2} Flowering Plants & Ferns of St Helena by Phil Lambdon (Pisces Publications, ISBN 978-1-874357-52-0), usually available from the Museum of St Helena.