This page discusses the history of Jamestown. For the city today see our page Jamestown.

The history of Jamestown James Bay is the most practicable anchorage on St Helena, and so what is now Jamestown is where all the earliest explorers landed. The history of Jamestown is therefore inextricably linked with the history of St Helena itself. Fernão Lopez, the island’s first exile almost certainly lived in James Valley.

Most of the island’s more notable events also took place in Jamestown. To read about these please see the overview on our page A Brief History or use the Island History index page.

The following images show the development of Jamestown’s fortifications over the years:

The following picture, taken by John Isaac Lilley in 1862, illustrates some interesting points which are shown in the detail images below:

The last image (above), also by John Isaac Lilley from 1862, again shows work being done re-building the Lines. It also shows the old drawbridge, built when Governor Dallas moved the entrance to town to its current position in 1832, at which time this became the main entrance to Jamestown (and, indeed, to the island) and the route shown in the 1850s image above as ‘Access to Town’ fell into disuse{4}. The drawbridge was replaced by a permanent bridge in 1935, using stone recovered from the demolished Ladder Hill Observatory. The ‘Main Bastion’ is now The Mule Yard, to the left of which is the Swimming Pool. The West Bastion is now the Leisure Park, including The Coffee Shop.

Unsurprisingly, given the amount of history it has experienced, many parts of Jamestown are said to be haunted, particularly The Wharf, The Castle and the area around Pilling School (the former military barracks).

The images below illustrate many aspects of Jamestown’s history:

The following image{w} apparently shows Jamestown at the time Napoleon was here. Really? Either the (unknown) artist had never actually visited St Helena, or he’d been smoking rather a lot of something… (More fantastic representations on our page Do they mean us?.)

We show below pairs of photographs, taken from the same spot many years apart. The cars are newer but not much else has changed. Such as has is noted with each pair: 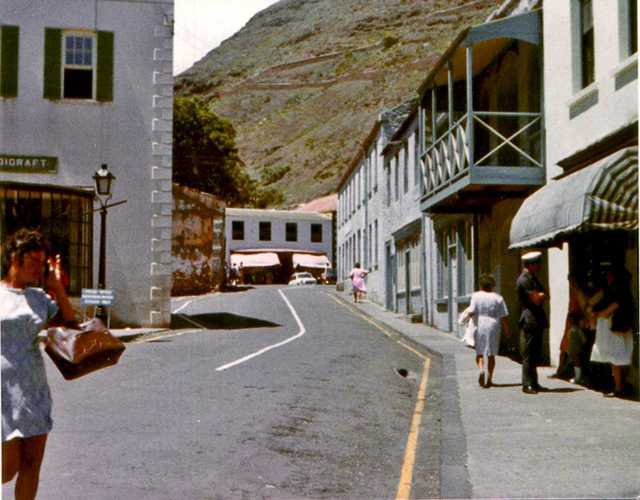 Lower Market Street: The shabby brown building (centre-left) was demolished soon after and replaced by a ‘modern’ supermarket, which later closed and was re-developed as a Department Store. The white line was removed because the road is too narrow for modern cars to pass. Napoleon Street: At the time of writing the building at the top (‘ Col. Gilpin’s House’) is being renovated, after being derelict for more than a decade, while the one on the immediate left was in use but is now boarded up. The Banyan tree growing in the Community Centre (formerly the School) was pared back to almost a stump in August 2009.

Here’s a comparison over a much wider date-range, from 1866{y} and today:

Below: First Englishman From the Records Historic Buildings

On 8th June 1588 Thomas Cavendish became the first Englishman to actually land on St Helena, during the return leg of his first attempt to circumnavigate the world (1586-1588). Arriving aboard The Desire but no longer accompanied by The Content and The Hugh Gallant (both apparently lost during the voyage) he stayed for 12 days and described the valley where Jamestown is now situated (then called Chapel Valley) as:

A marvellous fair and pleasant valley, wherein divers handsome buildings and houses were set up, and especially one which was a church, which was tiled, and whitened on the outside very fair, and made with a porch, and within the church at the upper end was set an alter. This valley is the fairest and largest low plot in all the island, and it is marvellous sweet and pleasant, and planted in every place with fruit trees or with herbs. There are on this island thousands of goats, which the Spaniards call cabritos, which are very wild: you shall sometimes see one or two hundred of them together, and sometimes you may behold them going in a flock almost a mile long.{5}

From the Records, as reported in ‘Extracts from the records’, by Hudson Ralph Janisch, 1885{6}

‍Jamestown Main Fort‍: Within the Line the Main Fort is defended by two large curtains and two half Bastions. On the East half Bastion there are 23 small guns called Falcons, Falconets, and Rabinets, which guns being small are kept only for salutes to save expense of powder. ‘On the Mount’ or front of the Main Fort are six very good demi-Culverins.