Every year the ‘Ivylets’ treated us to a Pantomime

There hasn’t actually been a pantomime since 2016. We hope that it is merely resting, and will resume one day… 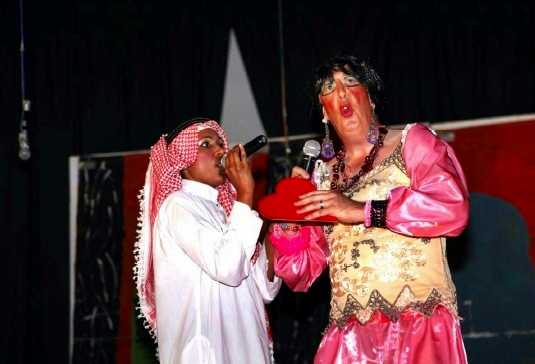 The idea of establishing an amateur dramatics group was initially that of George Checksfield, who with his wife Angela were on St Helena for some three years. In 1974 St. James’ Church had a very good choir and George used to sing with it at festive time. He was impressed with the singing in the church and he persuaded some of the members that they should produce some light entertainment for the community.

One of island’s most prominent male voice singers of the time was Lionel Yon of Wellington House. Lionel was also a natural comedian. George suggested the group should be called the ‘Ivylets’. The aim was to bring some happiness to the island, raise morale and shake things up it bit.

First productions were follies - light theatrical revues - which consisted of group dancing, singing, poetry and short sketches. The concerts were produced in the Paramount Cinema Hall. Tickets were often sold out by the first day, and the cinema hall would be packed.

Later the group was joined by Stanley Allen, St Helena’s first Attorney General, who with his wife Pat had had lots of theatrical experience and brought a different dimension to group’s presentations. They came up with idea of having a Pantomime at Christmas, and wrote and produced the very first one, called ‘The Blue Mynah Bird of Happiness’. The show was a huge success, playing for four nights to a packed hall.

The group experimented with drama but soon discovered that the Saint community preferred comedy.

In late 1981 a second cinema opened, called the Queen Mary Theatre. The Ivylets opened that hall with Jack and the Beanstalk, and for a few years had a choice of venues. Cinderella was performed in November 1984, at the same venue.

The cinemas declined in the 1980s due to the arrival of home video and by the late 1980s both had closed down. This would have left the Ivylets with nowhere to perform, but the island’s new Secondary School, Prince Andrew School, opened in 1989, equipped with a large performance hall. The Ivylets began productions there in 1994.

Productions over the years included ‘The Blue Mynah Bird of Happiness’ (photos below), ‘Goody two Shoes’, ‘Puss ‘n Boots’, ‘Cinderella’, ‘Beauty and the Beast’ and ‘Jack and the Bean Stalk’ (some of these more than once).

Photos from Panto 1975: ‘The Blue Mynah Bird of Happiness’

You are invited to start Christmas by seeing the Pantomime entitled ‘The Blue Mynah Bird of Happiness’, presented by the Ivylets at the Paramount Cinema Hall on the 4th and 5th December. Tickets will be obtainable from Mr C. T. Corker, Jamestown, from Monday 24th November at 9am.{b}

The first of the more recent Ivylets Pantomimes was ‘Babes in the Wood’, loosely based on the legend of Robin Hood and performed in December 2010 at Prince Andrew School. The event was a great success, leading to calls for the pantomime to again become an annual event. The show even entered island culture, in such that the following letter (extract) appeared in the St Helena newspapers early in 2011:

Dear Editor,
The Sheriff of Nottingham seems to have left the pantomime and joined SHG as an economist. Most of us peasants are bewildered by the range of new taxes being introduced…

The next pantomime was performed in January 2012: ‘Ali Baba and the 40 Thieves’. The story was narrated by 2 trainee fairies, Tipsy & Curvy, watched closely by their Head Teacher, Fairy Nuff. A third, very naughty fairy, Silly Tilly, did her best to disrupt proceedings. Prince Andrew School was packed for the performance, thus firmly establishing the pantomime as an annual event on St Helena.

The only two remaining from the original Ivylets group are Ivy Ellick, who handles overall production and runs the group, and Olive Williams, who was nominated as treasurer in the 1970s and holds that position right up to this present day.

In the past performers were mostly Saints, but today the cast is mainly comprised of visitors, mostly ex-pats here to work on Government contracts. The organisers have expressed the view that we need to rekindle the interest in our fellow St Helenians to become active once again in performing on stage and assisting with stage management.

Forty-three years on - DID YOU KNOW that until SAPS commenced presenting regular stage plays in 1972 there had been no continuous theatre on St Helena for more than a 100 years when the Theatre on Castle Square burned down.

The Players started as a play reading Group. At that time it was hoped that SAPS would continue and maybe replace the Arts Club, run by the late Mrs Eva Benjamin and Gilbert Martineau{2}, which did such good work in entertaining St Helenians some years before. Inevitably the time came when an idea of putting on stage was ventured.

The first play presented on stage, in May 1972, was ‘FREE AS AIR’ a Musical in two Acts by Dorothy Reynolds and Julian Slade, who also wrote the music. The Producers of this show were Jean and Peter Woodley, the then Cable & Wireless Manager. George Stevens was the Musical Director. This was followed in August 1972 by ‘AS LONG AS THEY’RE HAPPY’ a Farcical Comedy in Three Acts by Vernon Sylvaine - Directed and Produced by Brian Mann. Then ‘FRIENDS AND NEIGHBOURS’ a Comedy by Austin Steele in December 1972 performed for three nights! (by special demand). Directed by Brian Mann. Paul Geeson produced the following two, in May 1973 a Thriller by Robert Thomas entitled ‘TRAP FOR A LONELY MAN’ and in August 1973 ‘I’LL GET MY MAN’ another Farcical Comedy, this time by Philip King. Brian and Paul worked for the Diplomatic Wireless Station and lived at Piccolo Hill, Longwood. Becoming more daring and adventurous in November 1973 ‘A MURDER HAS BEEN ARRANGED’, A Ghost Story by Emlyn Williams was Directed and Produced by Edith Timm.

All Productions took place on the Stage at the Paramount Cinema/Theatre in Main Street, Jamestown…{c}

Some of St Helena’s former theatres are discussed on our Theatres page.