A database of old and important structures on the island 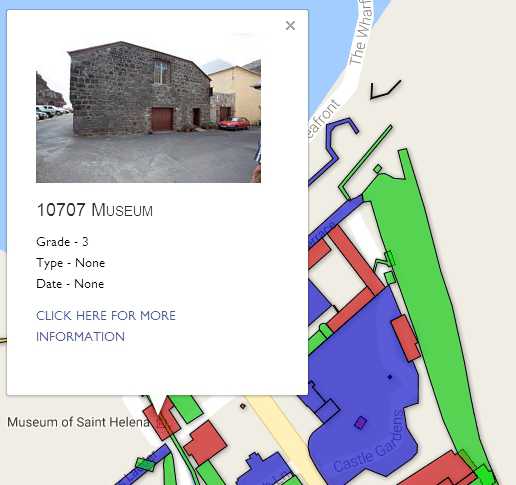 The Saint Helena Historic Environment Record (HER) is a database of any old and important structure on the island, containing over 1,000 sites and structures, presented as a map. The map can easily be navigated. Click on an item to pop-up a brief description (as illustrated, right); click on this popup to see the relevant detailed page.

The Historic Environment Record was compiled by Ben Jeffs, an archaeologist who visited St Helena from 2007 to 2012.

A report was compiled during the work which you can read: the ‘Built Heritage ReportⒾ’.

The intention behind creating the Historic Environment Record (HER) was to update, and therefore replace the 1974 Crallan Report as the definitive reference source used when assessing Planning Applications. However, although the HER was completed as required in 2012, at the time of writing the HER has still not been adopted for this purpose, and the Crallan Report remains the definitive planning document, despite its many limitations.

Interestingly, on 10th June 2021 the St Helena National Trust announced that it was planning to update the HER. Whether the updated version could then be adopted by the Government of St Helena as the definitive reference source used when assessing Planning Applications was not clear.

If the above link does not work you can download the full reportⒾ.

The HER only features buildings and similar structures, which is a shame because many of our roads also have an interesting history and most run in the courses developed in the 17th and 18th Centuries. 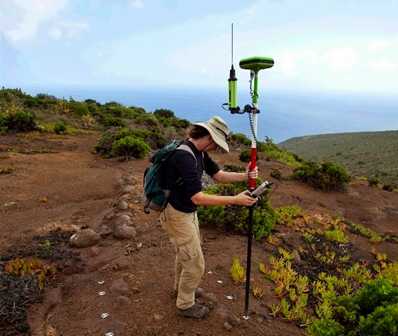 GPS recording equipment in use

Saint Helena has been a crossroads for world history for over 500 years. The grand themes of history have left behind grand buildings, well known to islanders and visitors; like the iconic Longwood House or the Fort at High Knoll.

This well-known side of the island’s history is only a tiny part of the story; the place was manned by soldiers and peopled by foreigners, Saints and the enslaved. These people worked the land, built houses, threw away their rubbish, laid roads and built walls. They covered the island in marks of their labour; they built what Saint Helena is now. Everywhere are the signs of their skill and efforts, from the finely cut red stone of a gatepost, to the hand-made iron nails that used to hold the thatch on a cottage. These things are their memorial; they are what make Saint Helena special.

Often these historic things are fragile and easily overlooked; to people close at hand they may be nothing more than a stone or a nail, but to the rest of the world they are remarkable things to be treasured. If we do not know where these things are and which ones are important to preserve, they could be lost, and with them part of Saint Helena’s treasure trove of history.

It is over 30 years since a list was made of the historic buildings on Saint Helena. This list, produced by Hugh Crallan, was ahead of its time, but it was produced in a few weeks and only covered a fraction of the island’s great buildings. Funded by the Tourism Development Project, the St Helena National Trust is producing a new list. A record of the island’s historic environment, with an accurate map and a thorough description and assessment of as many of the islands historic structures as it can find.

This list will be available for public view and will allow the important heritage of Saint Helena to be preserved for the future and managed to help build the island’s tourist economy. The Saint Helena Historic Environment Record brings together history and high technology. The fragile past of the island - its workers cottages, fortifications, graves of the enslaved and other historic structures - are being surveyed to produce a map. Because many parts of the island are so inaccessible, and covered in vegetation, it has been necessary to use a high-tech solution to work out exactly where these things are. The mini green disc in the picture measures the time difference between signals transmitted from satellites orbiting above the earth to work out the exact position of each historic structure, down to the nearest few centimetres.

The new map will be linked to a list or database describing what each structure is and what is important about it. It will also provide information about its condition and its potential tourist uses.

The whole list will eventually be available on the internet and on computers in the St Helena National Trust and in the Museum of St Helena, so the general public and visitors can search for things they may be interested in or provide information about things they have found that may not be on the list.