The heartland of St Helena, largely untouched by the events of history‍‍

Please note: this page is about the district. For the Cathedral see our St. Paul’s Cathedral page.

Around 21% of the island’s population lives within the St Pauls area{4}, making it the second most populous district (after Half Tree Hollow). Housing areas include New Ground (a westerly extension of Half Tree Hollow), Cleugh’s Plain, Guinea Grass, Rosemary Plain, St Pauls Village (surrounding the cathedral), Luffkins, The Gumwoods, Kunjie Field and many other smaller settlements. And yet very little of the island’s history happened here. No battles were fought here; the Dutch invaders in 1672 passed through it; nobody significant landed at Lemon Valley and no great political decisions were taken here.

Lemon Valley is a popular swimming and recreational area, best reached by a short boat ride from Jamestown and therefore included in many Dolphin-watching trips.

Significant buildings include: Plantation House, home of the Governor of St Helena and (arguably more importantly) also of Jonathan the tortoise, probably the world’s oldest animal; Prince Andrew School, the island’s secondary school; and St. Paul’s Cathedral, the island’s only cathedral church, from which the district takes its name.

Radio St Helena’s studios were at Pounceys during its years of operation, 1967-2012. The building has been stripped out but, as at the time of writing, the antennas remain and the building is unused, though it has been proposed that it might be used for social housing.

There is an area in St Pauls called ‘Scotland’, and there is also a ‘St Helena Island’ in Scotland, UK!

From our Where To Stay page:

St Pauls is the next place up the road from Half Tree Hollow, so also close to Jamestown. Our only up-country hotel is in St Pauls, as well as many self-catering flats/houses and bed-and-breakfast opportunities. St Pauls is in the centre of the island, so well connected to everywhere. Jamestown is a 15 minute drive away. Not much actually happens in St Pauls but it is a good base if the bustle of Jamestown is not for you. 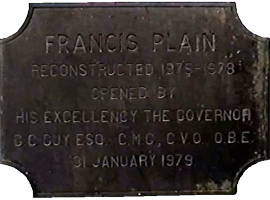 Formerly the ‘Water Fall Plain’. Referred to in 1692 as Henry Francis land neere High Water Fall and neere the Peake Hill. The name seems to have stuck!

The Plain remained private property and was, presumably, used as grazing land. In 1816 it was hired as an encampment for troops. In 1823 it was bought by the Government of St Helena.

In 1825 it was the H.Q. of the St Helena Militia. There was an armoury, officer’s mess and convalescent hospital. It was sold to the Thorpe family sometime after that, but with a reservation ensuring its continuing use as a public recreation ground and as a place for exercising the troops. It is now again owned by the Government of St Helena.

The Plain was levelled by the Royal Engineers in 1975/8 and opened by Governor Geoffrey Guy as a sports ground on 31st January 1979. It is now used by the public as the island’s sports field and is also used by Prince Andrew School and for major events and celebrations.

If there were Historic Buildings on Francis Plain they have almost all been lost. The only one remaining is Francis Plain House. It is not known exactly when it was built but it existed at the time of Napoleon’s exile - indeed Governor Wilks suggested it as a suitable place for the residence of Napoleon.

It passed to the Government of St Helena in 1823 with the rest of Francis Plain. In 1825 it is recorded as being leased to a Mr. Lorimer. It was occupied by Dinuzulu and his immediate family from 1895 until his departure in 1897 and it then became a Government dwelling for many years. Since 1988 it has been the staff room of Prince Andrew School. 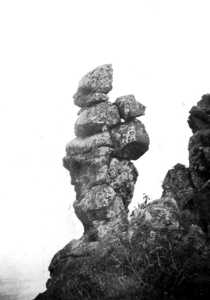 Between Young’s Valley and Lemon Valley lies Friars Valley, and the ridge between Friars and Lemon Valleys is Friars Ridge, the highlight of which is The Friar - a pile of stones about four metres high, worn, weather-beaten, and lichen-covered. When viewed from a distance it is said to resemble a cloaked and hooded figure.

The place where the Friar now stands was supposed once to have been the site of a Roman Catholic Chapel, adjoining which was the home of the officiating priest, a Franciscan monk of great piety and humility. The monk spent his life performing acts of charity, attending the sick and relieving the oppressed. One day while out walking the Friar came across a local girl, herding goats. Such was her beauty that the Friar fell immediately in love with her. Repeatedly he visited her, telling of his love. Finally she agreed to marry him, but only on one condition - that he renounce his vocation and convert to her non-Catholic faith. For a long time the Friar struggled with his conscience but in the end he decided to abandon his faith and marry the girl. The ceremony was performed in the local chapel. The service was read, and just as the bridegroom took her hand, the chapel was smashed to pieces by a falling boulder, killing all inside. In its place stands the gaunt image of the grim friar, an example and a sad warning to those who allow their passions to prevail over their better judgment. 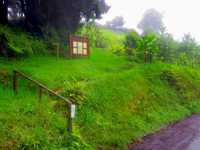 Entrance to the
George Benjamin Arboretum

There are two well-known Arboretums in the district, either side of the road to Blue Hill at Casons. They are the Clifford Arboretum (north of the road) and the George Benjamin Arboretum, named in honour of the re-discoverer of our National Flower, the Ebony (south of the road). Both feature gentle walks displaying a wide range of endemic flora and fauna.

The Clifford Arboretum was opened on 24th September 1976, named after former forestry officer John Clifford. The George Benjamin Arboretum was opened on Commonwealth Day 1995, aimed at giving easy access to examples of St Helena’s endemic plants. Many of the original specimens in the arboretum were planted by school children to celebrate Commonwealth Day 1995 and 1996. The shady canopy of the predominantly mature cape yew forest provides a cool moist environment for the growth of native ferns. The woodland supports a rich variety of ferns associated with the Peaks, including the unique Tree Fern. It also has a small population of Diana’s Peak Grass.

A lesser-known Arboretum was opened in August 1999 near St Pauls School, named after historian Philip Gosse who also worked to conserve the island’s Endemic Species.

Prior to the arboretums there was a project to plant trees at Casons which sadly did not go as planned:

There are no plans for any significant developments in the St Pauls area. More land will doubtless be acquired for housing, but apart from that it seems St Pauls is not scheduled to change for the foreseeable future and history will continue to pass it by…

Footnotes:
{1} An agricultural show, on the occasion of the visit of Anne, The Princess Royal in 2002.{2} Francis Plain House is the building to the left of centre, surrounded by gardens. Also clearly visible above is Alarm House.{3} Francis Plain House (the school staff room) is the older building at the right-hand end of the middle tier. The bank resulting from the levelling of the plain in 1979 is also clearly seen.{4} 928 from a total population of 4,439{h}.{5} Paul’s father was the island’s doctor in the 1960s and Paul accompanied him here. Paul visited St Helena in June 2018 and kindly gave us permission to use these family photographs.{6} @@RepDis@@{7} Father of John Melliss.